The Maasai Mara National Reserve is a must-see! This beautiful reserve offers safari experiences for first-timers and old hands-alike.

The Maasai Mara (also known as ‘Masai Mara’) Game Reserve comprises 1,500 sq. km of seemingly endless plains of short sweet grasses, ample feeding for the region’s plentiful herbivores. Two rivers, the Mara and the Talek, race through Maasai Mara National Reserve in Kenya providing sustenance for a wide range of wildlife. And the Mara, of course, is host to the most spectacular sights of the world-famous Great Migration!

Yes, this is Great Migration country. The migration may not take a specific route as it progresses from the Serengeti through the Loliondo, Moru Kopjes, Seronera, Grumeti and Ikorongo regions, for it is steered by factors such as the location of the best grasses and the prevalence of predators. Nevertheless, the arrival of wildebeest, zebra, gazelle, eland and impala in the Maasai Mara is guaranteed – as is the crossing of these animals over the swift-flowing Mara River!

THE HISTORY OF THE MAASAI MARA NATIONAL RESERVE

The Maasai became well established in the region during the late seventeenth century. The next hundred years or so brought the ravages of civil war and livestock diseases, followed by further devastation as the first European hunting safaris swept through in the decades before the First World War. However, in 1948 the area known now as the Mara Triangle was designated a game reserve and the land and its people began to recover. Further prohibitions concerning hunting were laid down in 1961. Today the Maasai Mara is rightly described as the heartland of Maasai culture in Kenya and is among the best African safari destinations.

WHAT ANIMALS WILL I SEE IN THE MAASAI MARA NATIONAL RESERVE?

All year round, all Big Five animals may be viewed, with rhino numbers increasing slowly since poaching in the 1970s and early 1980s. Carnivores include cheetah, hyena, jackal, serval, wild dog and bat-eared fox, resulting in plenty of hunts to see on safari. There are numerous antelopes too, and the massive Maasai giraffe, the tallest mammal on land!

The Maasai Mara is also a haven for birdlife, containing over 470 resident and migrant species! Approximately 60 of these consist of raptors, such as eagles, kites, harriers, hawks, falcons, and kestrels. There is majestic ostrich too, in addition to herons, egrets, bitterns, grebes, pelicans, cormorants, ibises, spoonbills, rails, crakes, secretary birds and the glamorous crowned crane. 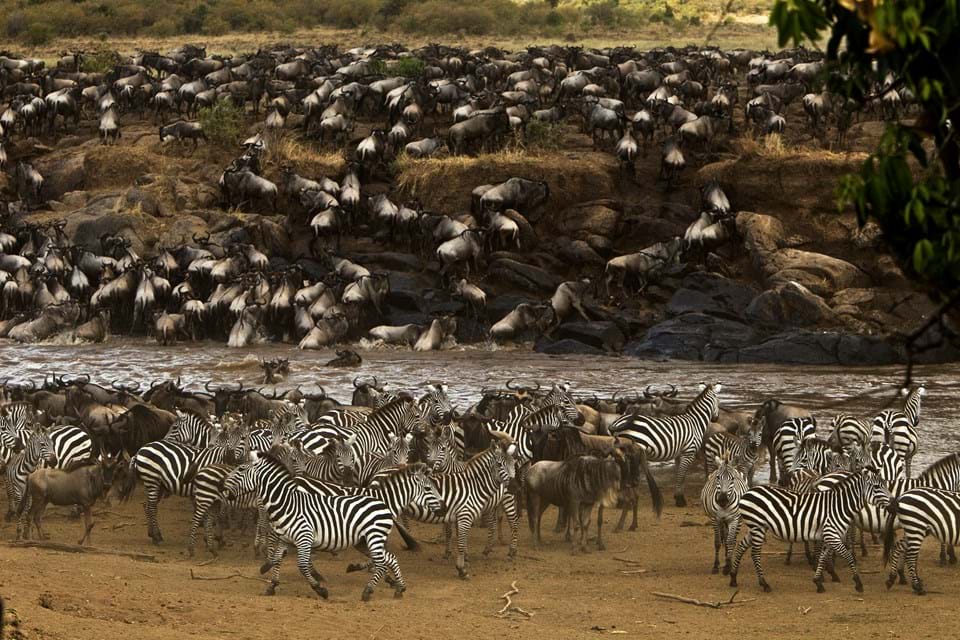 The best time to visit the Maasai Mara Game Reserve is from July to October. Depending on the arrival of the rains, the crossings occur between these months, when herds numbering hundreds of thousands thunder over the plains to the riverbanks and hurtle through waters teeming with immense Nile crocodile. It is not unusual for scores of wildebeest and others to lose their lives here, many washing up on the shores. Their corpses are ripped apart by crocs, hyenas, vultures, and storks. This really is nature at her most ferocious! It is due to these dramatic scenes that the Maasai Mara is an extremely popular safari destination.

THINGS TO DO IN MAASAI MARA, KENYA

With so much to see, it is not surprising that the Maasai Mara is absolutely awash with visitors. This can be quite overwhelming! There are a number of camps and lodges to choose from and we recommend getting in touch with us for specialist advice, to ensure you are able to avoid the crowds during your stay here! Camp activities include exceptionally good game drives and safari walks, plus scenic flights and hot air balloon rides.

This trip is recommended for solo travellers, couples, honeymooners, and families. Starting in Nairobi, it moves on to two superb safari areas, explored from high-quality properties that offer a great range of things to do!

Suitable for solo travellers, couples, honeymooners, and families alike, this trip takes in the wildlife-rich Samburu and Maasai Mara! You’ll stay at two sumptuous and off-the-beaten-track camps, with a discount available in the MMNR.

This is a very special itinerary, offering the highest levels of luxury and service in three amazing locations! The focus of the safari is the Maasai Mara and the Olare Motorogi Conservancy, and for the coast trip it’s the idyllic island of Zanzibar.

This itinerary offers the ultimate bush-and-beach break! It begins with some safari time in the wildlife-rich Mara North Conservancy and ends on the beautiful beach of Diani. Both properties you’ll visit have special offers for honeymooners.

This family trip to Kenya combines the activities and adventures available on the Laikipia plateau and in the wildlife-rich Maasai Mara! You’ll stay at camps that are particularly well suited to children.

Group trips with friends or extended family are often the most enjoyable trips our clients ever do! This adventure to the Maasai Mara and the Kenyan coast is a favourite due to its excellent value and guarantee of first-class game viewing.

Amboseli and the Maasai Mara combine in this solo trip to provide one superb safari! And you’ll enjoy seriously good value for money, as all properties waive the single supplement and there’s a nine-night discount too!

This superb safari features the Lewa Wildlife Conservancy and the world-renowned Maasai Mara region! It involves three fabulous properties from the Elewana Collection, none of which charges a single supplement. There’s a nine-night discount too!

You’ll begin this trip in the vibrant city of Nairobi, before travelling to the Lewa Wildlife Conservancy and the Maasai Mara National Reserve for superb safaris! No single supplement is payable, making for excellent value.

This trip uses three Safari Collection properties, two of which provide a saving of 30 per cent! Starting in Nairobi’s world-famous Giraffe Manor, you’ll move on to the Samburu National Reserve and the Maasai Mara for some wonderful wildlife viewing.

This trip begins at the internationally renowned Giraffe Manor, before continuing on to three of Kenya’s best safari areas! All four properties we use are from the portfolio of Safari Collection, and at three of these there’s a 35 percent discount.

This trip uses two very family-friendly properties! Beginning in the wildlife-rich Laikipia, it continues on to the famous Maasai Mara – specifically Mara North Conservancy, for exclusive experiences of the Mara region.

View All Trips
Unfortunately, there are no results for this search. Please use a different filter combination or contact our experts to start planning your tailor-made safari.

Offbeat Riding Safaris offers fantastic horse-riding safaris for adventurous travellers! Both set-date departure and bespoke trips are available, and you can explore the Mara region, Laikipia, or Amboseli National Park.

This is a classic mobile camp, offering sightings of the Great Migration river crossings from July to October, and fantastic wildlife viewing all year round! Children of all ages are welcome.

Little Naibor is one of a trio of properties forming Naibor Camp, together with Naibor Camp itself and the adventurous Naibor Wilderness.

This is an adventurous little camp in the wildlife-rich Maasai Mara. Described as ‘a hidden haven’ by Great Plains’ Dereck Joubert, it’s the perfect base from which to explore the famous national reserve.

If you like a little luxury on safari, you’ll love Sand River! Leather seating, Persian rugs, billiards… this property provides a glamorous 1920s-style base from which to go on safari in the wildlife-rich Maasai Mara National Reserve.

Rekero is a seasonal camp, closed from 5th April to 31st May to allow the site to regenerate.

Governors’ Private Camp is pretty awesome, ideal for a big group and also a good option if you are travelling individually and have no objection to sharing this small camp.

Little Governors’ Camp was set up during the 1970s and its style is very similar to elder sister camp Governors’.

Mara Ngenche Safari Camp boasts amazing views of the Mara–Talek confluence! The property has accommodation to suit most types of traveller. Children of all ages are welcome, and the camp was awarded a TripAdvisor Certificate of Excellence in 2017!

Mara Bush Houses provide luxurious accommodation for families or groups. An excellent option for travellers seeking exclusive experiences of the Mara! Children of all ages are welcome.

Opened in 1998, Basecamp Maasai Mara is a very original eco-camp.

Set up in 1972, Governors’ Camp is among the Maasai Mara National Reserve’s best-known camps – and it is possibly the oldest!

Governors’ Il Moran Camp is situated on a woody bend of the Mara River, within the busy Musiara region of the Maasai Mara National Reserve.

Kichwa Tembo Tented Camp, by luxury travel company &Beyond, is situated in a private concession within the remote west region of the Maasai Mara National Reserve.

Kilima Camp is situated in the gloriously beautiful Mara Triangle in the Maasai Mara, south-west Kenya.

Mara Serena Safari Lodge is located in the Mara Triangle, between the Mara River and Oloololo Escarpment in the Maasai Mara National Reserve.

Naibor Wilderness is one of three camps that make up Naibor Camp, situated in the Mara confluence sector of the Maasai Mara National Reserve. With just three guest tents, it offers a very exclusive experience of this wildlife-rich region!

Sanctuary Olonana was established in 1999, the first property in the portfolio of luxury company Sanctuary Retreats.

Speke’s Camp is a fantastic little camp, situated in the Mara North Conservancy on the border with the Maasai Mara National Reserve.

"Yellow Zebra provides truly amazing service. From the initial email to the final booking, everything was handled with the utmost care and professionalism. Both Olivia and Catia were exceptionally prompt and thorough in their responses. The ZOOM calls with Olivia were particularly helpful in hel..."

"Trip of a lifetime! Yellow Zebra booked fantastic lodges with great guides. Arranged all our transportation for travel once in South Africa. Great communication with us leading up to the trip and after we were there. Would absolutely use Yellow Zebra again and would recommend using them to ev..."

"We had an amazing time in Zambia and Flat Dogs safaris camp was perfect for our family . I would have felt daunted booking this without Yellow Zebras expertise"

"Second time to Africa with Yellow Zebra and both trips were great, largely as a result of my trip planner, my guides and the support "on the ground". On most recent trip to Uganda YZ connected me with Experience Uganda (EU). They were amazing. Africa is not someplace you want to feel "abandoned"..."

"We were so grateful for the help we got from Yellow Zebra in planning our safari trip. Having never been to Africa before all the information and literature received from Yellow Zebra and Sebastian's suggestions and personal knowledge of the area was such a great help and so valuable to us. Sebas..."