The YZ 'Top 5' safaris in Africa

Choosing where to go on safari can be somewhat daunting! With so many first-class countries to consider, and so many different environments, species, sights, and activities to choose from, planning a trip can often leave you feeling completely confused! So here’s a rundown of our best safaris in Africa, based on the highlights from each of the main safari countries:

1. Ngorongoro Crater and the Serengeti, Tanzania 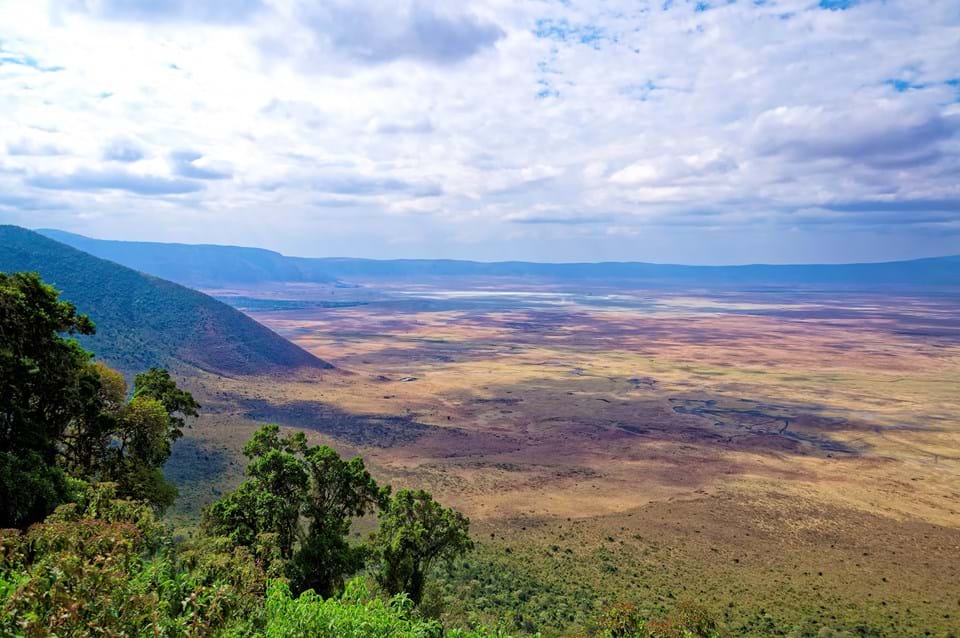 This safari incorporates Tanzania’s best-known parks. Both the Ngorongoro Crater and the Serengeti form part of the celebrated Northern Circuit, which also includes the smaller and less popular Lake Manyara and Tarangire national parks. Ngorongoro, or ‘the Crater’ as it is commonly known, is one of the most beautiful areas to be on safari in the whole of Africa – the setting is jaw-droppingly stunning! Nestled within the intact caldera of an extinct volcano is a self-contained ecosystem that is packed with Africa’s Big Five. Large herds of herbivores roam the Crater floor, while prides of lion and packs of hyena live alongside some of the continent’s largest tusker elephants and over thirty endangered black rhino. 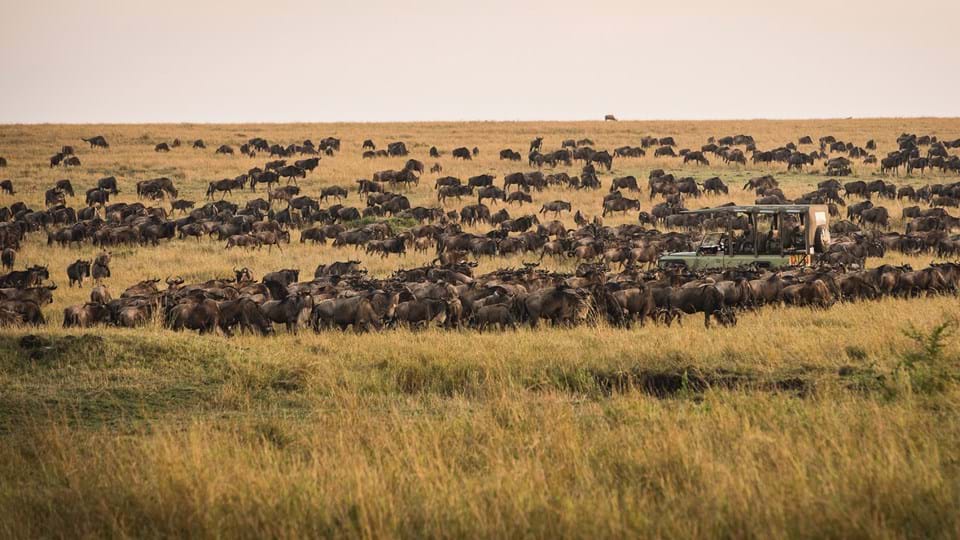 Within driving distance, or a short flight, from the Crater, is the world-famous Serengeti National Park. Stomping ground of the two-million-strong Great Migration and home to the highest populations of predators in Africa, the Serengeti is one of those rare places that exceeds your imagination! It is the Africa that we all have in our minds – grass plains stretching as far as the horizon, punctuated only by the odd flat-topped acacia tree. Even without the natural wonder of the huge herds following their ancient migration routes, the concentration of game here is truly phenomenal and this is arguably the finest safari park in Africa! This is classic Big Five game-viewing territory, in an authentic environment with no fences and little interruption from man.

2. The Okavango Delta and Victoria Falls, Botswana and Zimbabwe

Home to Africa’s most amazing private parks, including the predator-rich Moremi Game Reserve, the Okavango Delta offers the widest diversity of safari activities, from boat and mokoro (traditional canoe) safaris, to walking and game drives, as well as the most exclusive safari experience on the continent! The Okavango’s flood waters come from the highlands in Angola, with the main deluge usually hitting the north-west of the Delta in April and transforming this dry landscape into a wetland paradise full of Africa’s big game. The region’s sheer beauty, combined with the concentration of animals and minimal numbers of tourists, makes it easy to understand why the Delta is considered one of Africa’s top travel destinations! 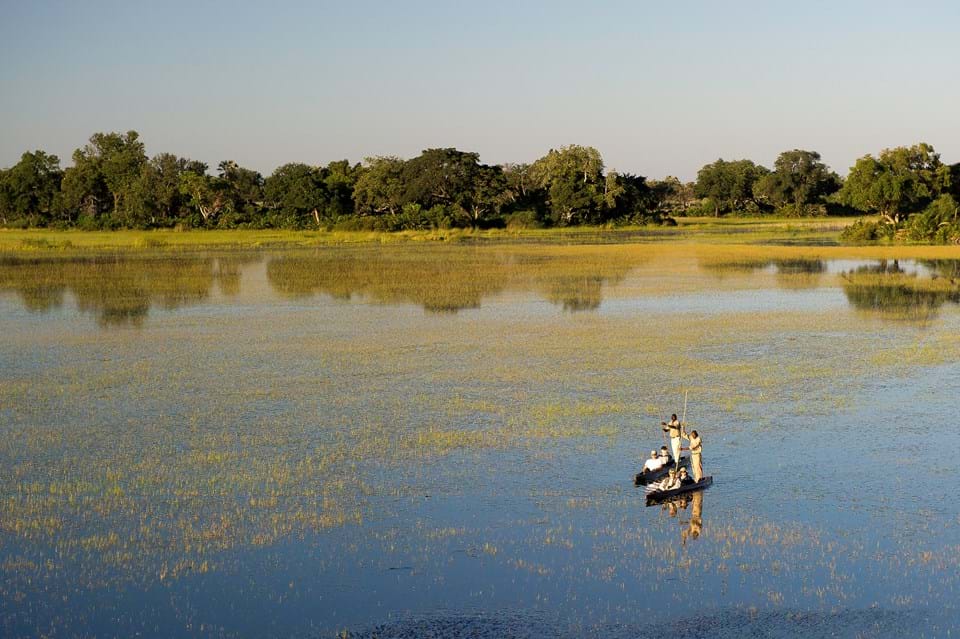 After scouring the plains and waterways for big game, take a trip to the awe-inspiring Victoria Falls. One of the world’s most famous waterfalls, the Falls are within easy reach of the Delta and not to be missed! At over 1,500 metres wide and 100 metres high, this is the largest curtain of falling water in the world. The indigenous name for this spectacular natural feature is ‘Mosi-oa-Tunya’, The Smoke That Thunders – this is very apt, as the misty spray and the noise the Falls produce can be seen and heard from several kilometres away! David Livingstone, the first European to see Victoria Falls, remarked that ‘scenes so lovely must have been gazed upon by angels in their flight’. Today the Falls are just as stunning and the area is also the heart of the region’s adrenalin activities – bungee jumping, white water rafting, and gorge swings are just some of the activities on offer here. 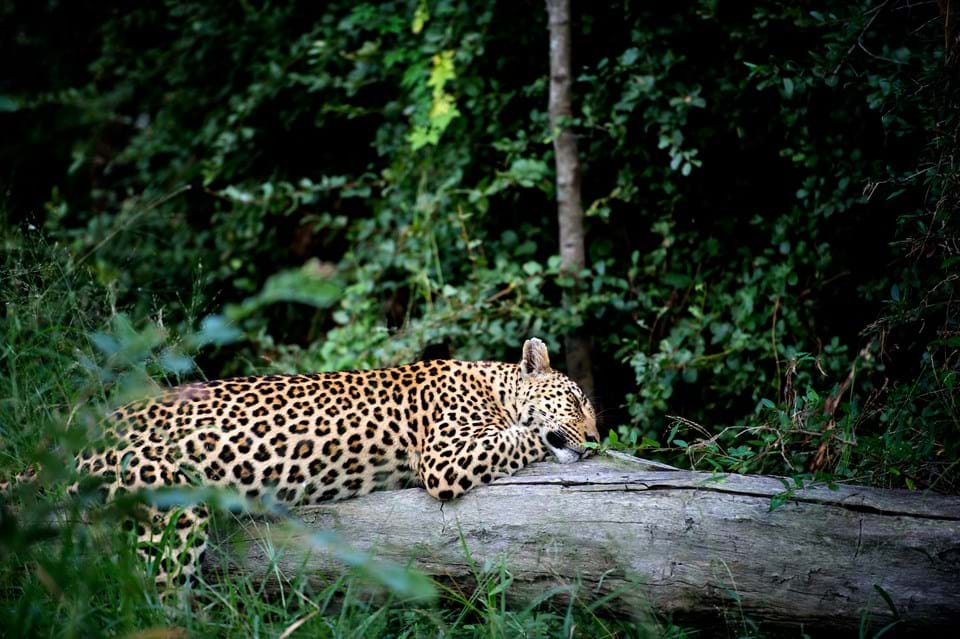 The Sabi Sands game reserves have both fantastic game viewing and an unparalleled level of luxury accommodation. This is certainly the most sumptuous safari experience in South Africa and reputed to be one of the best on the continent! Located on the Kruger National Park’s south-western border, the reserves share a 50 km unfenced boundary with the park, enabling game to move freely between the two areas. With both the Sand and Sabie rivers flowing through the reserve, there is also plenty of sustenance to ensure good game viewing all year round. The region is particularly renowned for its leopard sightings! The lodges with the most wow-factor in Sabi Sand are Singita’s Ebony Lodge and Boulders Lodge, which have set new standards of safari luxury and have picked up many traveller awards along the way. 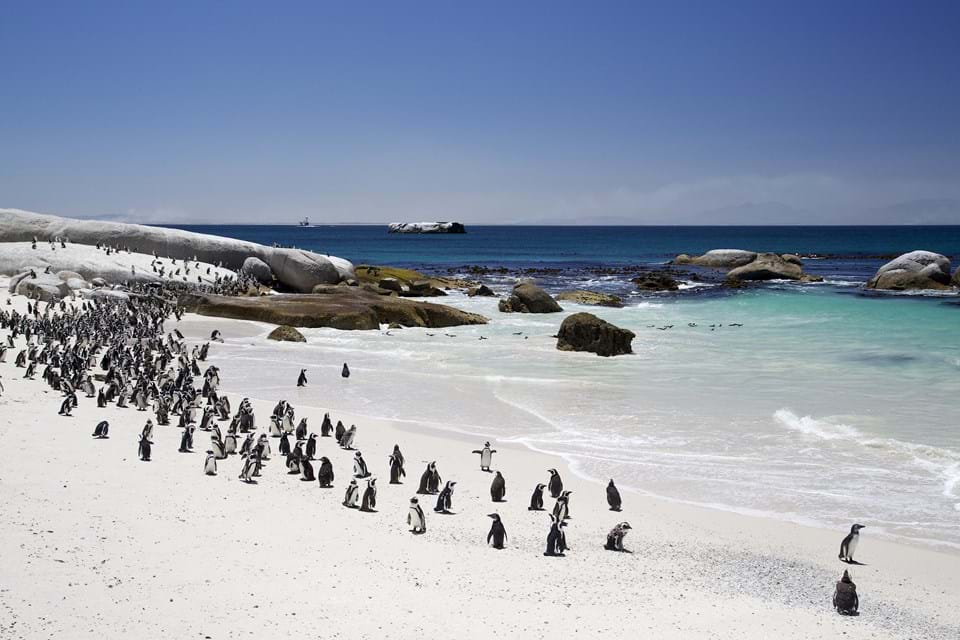 The perfect partner to a safari in this area is a few days exploring the ‘Mother City’ of Cape Town. From natural wonders and beaches, to museums and world-renowned shopping and cuisine, picturesque Cape Town has it all. The most famous sights are the iconic Table Mountain, which you can hike up or take a cable car to the top, Boulder’s Beach with its resident colony of penguins, historic Robben Island, Kirstenbosch National Botanical Garden, the Cape of Good Hope… and there is an endless list of other exciting things to do! Also within easy reach are the Winelands, home to some of the most celebrated wineries and some of the most scenic wine routes in the world.

The Maasai Mara is a beautiful reserve of sprawling plains, one of the oldest and best-known safari destinations. The Mara River, which races through the Reserve, is host to the most spectacular sights of the Great Migration from July to October, as hundreds of thousands of herbivores thunder over the plains to the riverbanks and are forced to cross and run the gauntlet through waters teeming with huge and hungry Nile crocodiles. But that’s not all the reserve has to offer! All year round, all Big Five animals may be viewed. Rhino numbers are increasing slowly, amid plentiful carnivores and numerous antelopes. And there is also the massive Maasai giraffe, the tallest mammal on land! 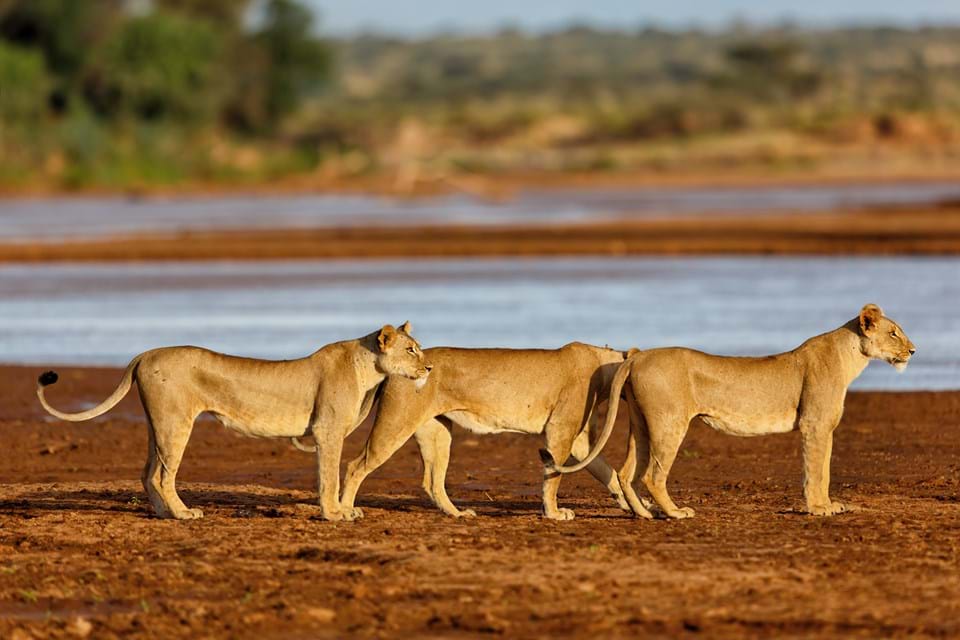 For something completely different and a fascinating cultural safari, combine a vacation in the Maasai Mara with a visit to the Samburu National Reserve, in the very centre of Kenya. The Samburu is situated on the banks of the Ewaso Ng’iro River, which, running from the glaciers of majestic Mount Kenya, supplies water for wildlife throughout the year! It is this reliable water source that first attracted the herders, now known as the Samburu people, to the region. The Samburu remain here today and it is a privilege for travellers to observe their ways of life, similar to yet distinct from the culture of the Maasai. Of all the animals in Samburu and Buffalo Springs, the reserves are most famous for their own Big Five – Grevy’s zebra, with their smart pin-stripe pattern; gerenuk, of the impressively stretchy neck; Beisa oryx, with pointed horns and distinctive markings; reticulated giraffe, clad in attractive coats; and Somali ostrich, a feathery delight!

Etosha is Namibia’s most famous game park and one of Africa’s best destinations for Big Five viewing. The park’s main characteristic is a salt pan so large, it can be seen from space! And it has serious amounts of game – travel here in the dry season, and you will find so many different species congregated around the waterholes at one time, great game sightings are guaranteed. For this reason, there is nowhere else quite like it! Etosha was built as a reserve to explore independently – the road network is superb and designed to open the park up to self-drive visitors, making it one of the most accessible game reserves in Namibia and Southern Africa. Despite this, it is actually surprisingly quiet despite being absolutely overflowing with animals! 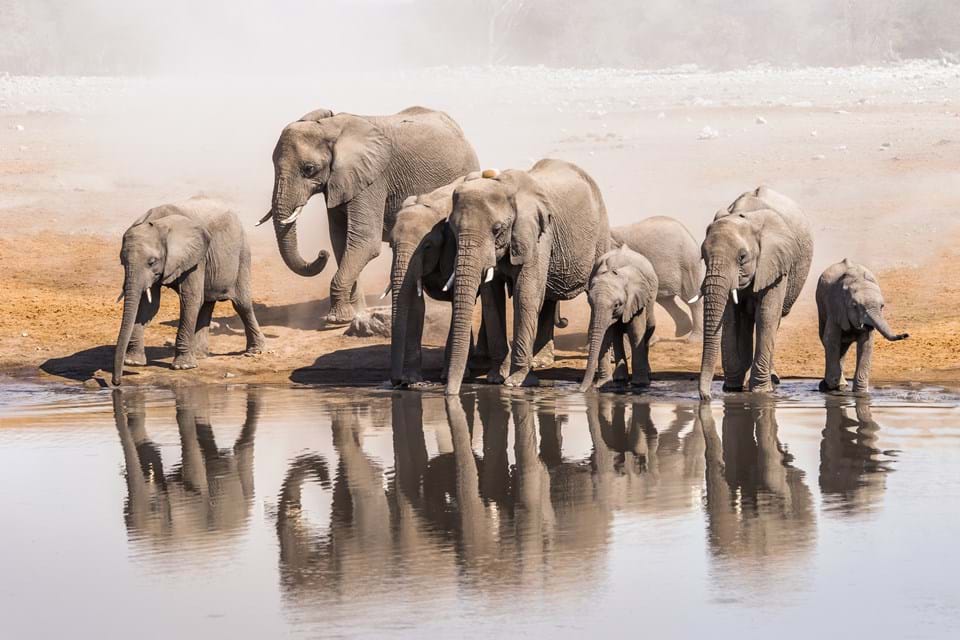 In contrast to Etosha, there is little game in Sossusvlei, but what animals there are here, combine with the unique landscape to make it one of the most popular destinations in the country. When people think of Namibia, Sossusvlei is the place they imagine first. Huge orange sand dunes as tall as skyscrapers dominate the landscape, providing the perfect backdrop for stunning photography. It is a wonderfully dramatic part of Africa! Sossusvlei offers game driving both by day and night, as well as walking safaris. There are also a number of other activities offered in the area, such as ballooning, horse riding, and quad biking.

If you'd like more information on planning a vacation to Safari Africa, feel free to call us on +1 855 225 1155 or send us an email at [email protected]