Heading off the day after their wedding, John and Jac travelled to South Africa for a Winelands, Cape Town, and safari honeymoon with Yellow Zebra. Here Jac reviews their trip, detailing their favourite highlights and recommendations:

Having got married on the Saturday before we left (i.e. the day before), we arrived in Cape Town on the Monday morning looking forward to some downtime. The Clarendon at Bantry Bay was exactly what we needed. It has a beautiful location with stunning sea views, the staff were very welcoming, and we had a lovely day of relaxing before heading down to The Bungalow restaurant for our evening meal and a drink.

Our highlights of the Cape Winelands

A particular highlight of the whole trip was our hotel, Angala – it really is heavenly. Since we were the only guests (!!) we were upgraded to a premium cottage, which was palatial! I can’t believe we had our own log burner and sofa, balcony, garden and enormous bathroom. It was all just spectacular, and we loved the fire and the outdoor shower.

The staff were wonderful and we really felt like royalty. In fact, on our second night we decided to eat in and they laid a table for us in front of the outdoor fireplace on the terrace. The food was amazing and afterwards we both agreed we had preferred our meal there to the previous night’s dining at La Petite Colombe (although that was also a very memorable experience). We finished off the night with a sit in the hot tub under the incredible stars and an Amarula by the fire before bed.

Outdoor shower and views from the premium cottage

We enjoyed the natural beauty of the Winelands in general and the stunning mountain views all around. We checked out Rickety Bridge for a casual lunch with a nice view in their bistro. We went and did the walk around the La Motte estate, which was interesting.

We had lunch one day at Roca, which was deserted but also very friendly and had an amazing panorama of the valley. Our complimentary tasting at Vrede en Lust was very good and we bought two bottles of their Boet Erasmus to bring home with us! We also drove up to the top of the pass to take some photographs, which turned out well.

I would also recommend the bistro at Tokara on the Stellenbosch pass – we stopped here for lunch on the way to Franschhoek and the food and wine was excellent and the views from the bistro are lovely. In fact, that is where I first discovered my love for milk tart, served warm here with rooibos ice cream.

It was actually with some sadness that we headed back to the city, but we had faith that all the rumours about Cape Town must be true! We had spent the day in the Winelands, so we arrived at Abbey Manor around 6pm – they seemed a little surprised we were “so late” but were perfectly welcoming and helpful. I didn’t realise that perhaps we should have told them we wouldn’t be arriving until the evening.

The guesthouse itself was beautifully presented, an impressive building and setting too, being right at the foot of Table Mountain. Again, we were the only guests – it was definitely the beginning of winter! Our first evening we headed down to the V&A Waterfront to wander around and we chose one of the many bars for a bite to eat.

The following day was gorgeous and clear, so we decided to make the most of it and climb TM. We opted for one of the longer routes, so got an Uber to Kirstenbosch and went up Smuts Track. It really was stunning! The walk/climb was not for the faint hearted and there were sections where it wasn’t clear there was a path at all, it felt like we were climbing up a mountain stream! When we broke through the treeline, the views were phenomenal.

By the time we made it to Maclear’s Beacon we had 360 degrees crystal-clear views - it was brilliant. In fact, it was quite surreal walking the further 45 minutes to the cableway and finding so many people!! We enjoyed a milk tart ;-) and a glass of white wine each before riding down and back to Abbey Manor. 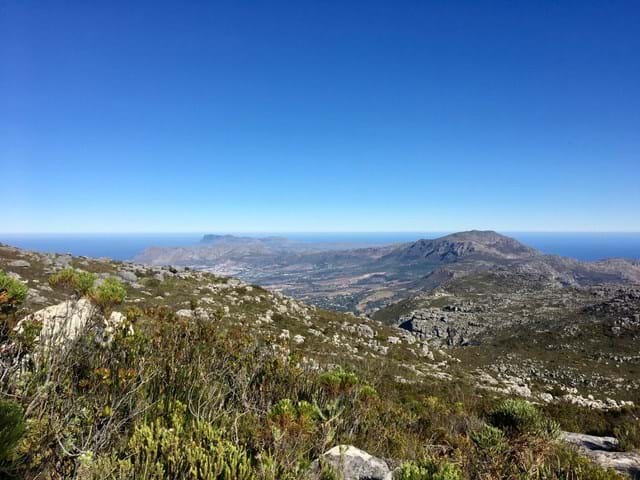 Views of the Western Cape

We showered and changed and jumped in the car to Clifton to watch the sunset and have dinner. We had wanted to go to the market at Hout Bay as it was Friday night and was recommended to me, but we were so exhausted we didn’t make it that far!!

Our next day we went to Granger’s Bay and to the Oranjezicht City Farm Market, which was really lovely – so much good food, dogs, crafts, and produce. It had a really local feel to it, and we enjoyed it so much we were going to return on Sunday for breakfast but unfortunately didn’t make it. We walked from there round to the waterfront and did some shopping for our safari.

Unfortunately that evening I got a stomach bug and the following 24 hours were a bit of a write-off! However, John did get to sample what Uber Eats had to offer, and I did make it out of my sickbed briefly on Sunday to drive to Hout Bay where he had some fish and chips and prawns (in the rain!). So sadly we never made it to the Cape, although we got a good view from the top of the mountain, and we never found the penguins. But we will just have to go back some day and fill the gaps! …although we will find it hard to stay away from Franschhoek too!

The safari section of our honeymoon

So I took some drugs to get me through the journey up to Kruger and we arrived at Motswari – another dream destination! The autumn leaves were gorgeous and not what I had expected from Africa, to be honest. Our bungalow was so simple and stylish, with a lovely view over the riverbed, and I loved the local artworks. I didn’t feel up to going out on the afternoon game drive but was relieved that John finally had something to do while I felt sorry for myself! He returned bursting with excitement and initially feeling too guilty to tell me that they had seen elephant, rhino, zebra and leopard!!

Evening meals in the boma were great and we got on very well with our fellow passengers (another honeymoon couple from the US and a retired Australian couple), so much so in fact that on the second night when tables for two had been laid we asked whether we could sit together again! The food was exceptional and I was only sad that, still not feeling well, I couldn’t eat much of it!

The game drives were brilliant, we saw so much and the guide (Sinclair) was very knowledgeable and always telling us interesting facts. The timetable at Motswari was also clever because breakfast was served after the morning drive but lunch was served late at 2:30 as a buffet-style savoury and sweet before the afternoon drive at 3:30 – this worked really well for us, and we found at Kirkman's (next stop) where lunch was earlier and more of a three-course affair we didn’t have room for both! We were sad to leave Motswari because it is a very restful place and has a sense of being quite at one with the surrounding landscape and wildlife, which we loved.

BUT… Kirkman’s… WOW! Really so totally different to Motswari. We were also really surprised by how much the landscape changed just within the 3 hours’ drive between the two camps, leaving the autumn leaves behind and heading into the lush greenery of the Sabi Sands.

Angela said Kirkman’s would be the highlight and she wasn’t wrong!! The whole place is beautiful, the décor… the grounds… our room was absolutely gorgeous. I wanted to pack it up and bring it all home with me. I think we had the best view in the house, as we had room 14 on the end where the balcony affords an almost triple-aspect view of the Sand river where we sat for hours with a glass of wine, a book and a pair of binoculars watching buffalo, elephant and giraffe grazing and drinking.

For me, this place was my dream of Africa and I’ve seen other people say it in reviews of KK but it was like being Meryl Streep in Out of Africa and waiting for Robert Redford to fly over the horizon!! I feel guilty saying it (and John certainly won’t agree!), but it was almost like the game came second! Haha. Sure enough it did not disappoint! We saw mating lions on our first drive, many elephant, buffalo, rhino (black and white), leopard, wildebeest, zebra, giraffe, hippo, crocs, and many beautiful birds including my new favourite the lilac-breasted roller!

We made a request for a sunset drinks stop on our last evening drive and our ranger James did not disappoint – he found a gorgeous spot with a view of the sun falling in between the Drakensbergs and very obligingly a herd of wildebeest arrived on the scene just in time to be in our photos.

Overall review of our trip 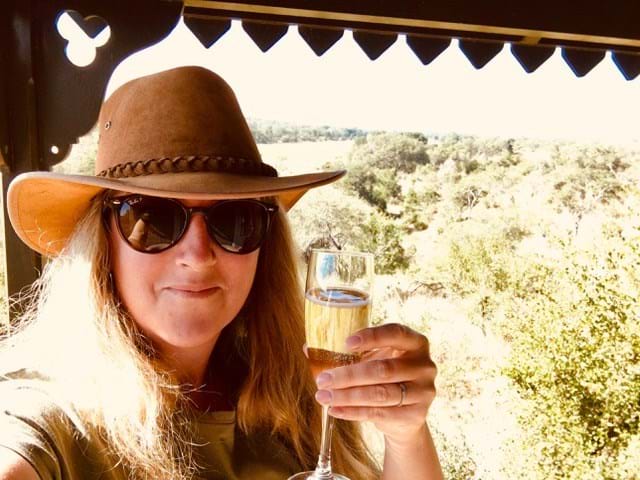 Cheers to a honeymoon in South Africa

Suffice to say we absolutely did NOT want to come home and had the most fabulous time. Thank you so much to YZ for your work to put our itinerary together for us and for your recommendations, which were spot on. We would both happily go back to Motswari and Kirkman’s and in fact I am going to suggest my parents book the same itinerary. Both lodges are very different, but each in its own right offers a very special experience and we loved the contrast. It’s difficult to compare places because all are so different in many ways, but if I had to pick one to go back to this would be my order: 1, Kirkman’s; 2, Angala; 3, Motswari; 4, Clarendon; 5, Abbey Manor.

If you’d like to experience a honeymoon like John and Jac’s then why not contact us here. Alternatively, do take a look at our blogs and recommendations below for more honeymoon inspiration: