Here, YZ co-founder Julian talks about his experience of flying across Kenya's Maasai Mara in a hot air balloon:

From my experience, when it comes to viewing wildlife from the air, not much beats a ride in a hot air balloon. Putting helicopters and bi-planes aside, hot air balloons offer a peaceful experience of game viewing – combine this with an African sunrise and you’re in for the trip of a lifetime! My hot air balloon flight took place in Kenya’s Maasai Mara National Reserve. After several occasions of seeing clients head out from camp at 5am for this activity, it was finally my turn to take to the skies!

After a 4:30am start, a rather muddy drive to the take-off site, and a warm cup of tea, we were instructed to hop into the basket for the launch. With the flame on full burn, the driver began to raise the basket until the rope attaching the balloon to the ground went tight. After we had waved goodbye to the team on the ground, the balloon was finally released and the flight began!

Picture this – slowly rising to tree level to the height of the birds and the monkeys. After a near miss with a branch, the basket clears the treeline and the Mara River comes into view. Leaving the grunting hippos behind, it’s not long before we see thickets opening up to vast plains and the sunrise rapidly illuminating the scars in the vegetation below. For me, this is the best place in Africa to experience game viewing from the air. 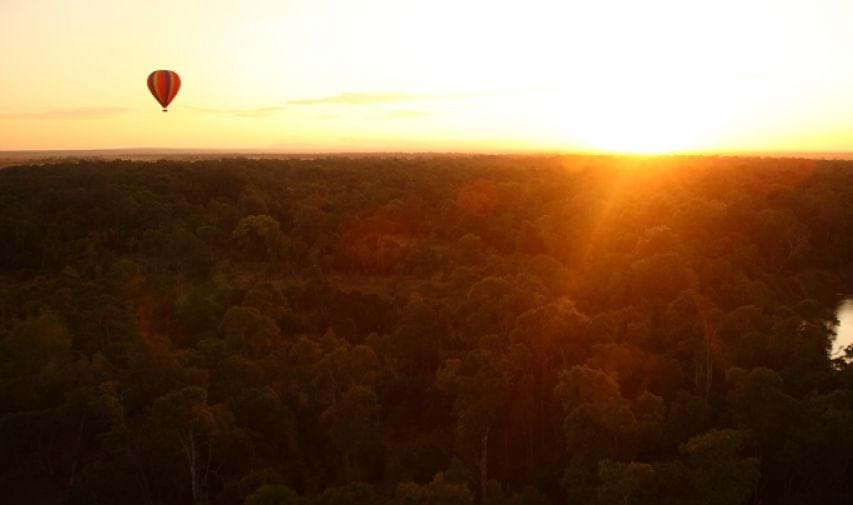 After half an hour of game viewing, the driver pointed out our landing site and after a gradual decline in height we were instructed to position ourselves for landing at the base of the basket. In slow motion, the balloon began to touch the ground until eventually the basket came to a halt.

Shortly after unloading, the vehicles arrived to collect us and we were whisked off for bush breakfast on the plains – and it was nothing short of exceptional. After a delicious meal and a much-needed coffee, we set off back to the base to meet our guides and return to camp for a well-deserved siesta!

What were you able to see during the hot air balloon ride?

The flight was simply beyond my expectations! We saw an amazing variety of wildlife from the basket, including a rhino and several herds of elephant. My highlight was the sounds of the bush from the air – and the clarity of the elephants trumpeting below.

What you recommend this activity to clients?

I reckon nothing beats a hot air balloon flight in the Maasai Mara – it really is a must-do! During July through to September it is possible to see the wildebeest migration from the air and take in the sheer mass of the mega-herds as they graze on the plains below. I would highly recommend that you take to the skies and marvel at the beauty of the Maasai Mara!

What to wear – The mornings are chilly in the Maasai Mara, so you will need some warm clothes for the early start (a fleece and light jacket are ideal). In general, layers are best, as the weather will warm up quickly throughout the morning. Closed comfortable shoes are also required.

What to take – I would suggest taking as little as possible in the basket, as items can get in the way during landing. Cameras are allowed and you can get some incredible pictures from the air, but I would recommend taking the minimum amount of equipment to avoid breakage! Another item I would suggest taking is binoculars – I wish I’d had these during my flight!

Is there an age limit for children? Generally speaking, children who are taller than 120cm can go on a balloon safari, as they can see over the basket. This does vary, depending on the company.

If a hot air balloon ride is something that you might be interested in experiencing during a safari to Africa, don't hesitate to contact one of our experts to find out more here. Alternatively, read our guide on the best places to try this activity out in our special interests page on Hot Air Balloon Safaris.