For those who need to go full ‘cold turkey’ on the internet or for those who are tired of their partners updating Facebook, posting on Instagram, and checking their emails, our experts have provided their top picks where you can unplug and enjoy the Digital Detox… 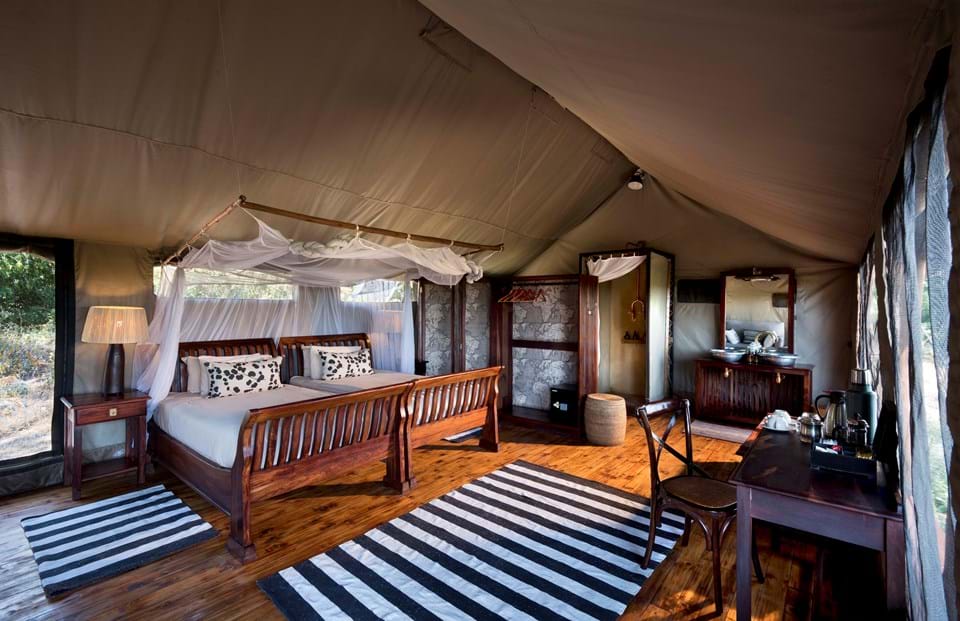 If you are looking to stay in a good-value Linyanti camp between June and November, then Linyanti Ebony is a great choice, especially if you like small and intimate camps. It features just four Meru-style tents, which are raised on wooden platforms, complete with sleigh-like beds, sisal-mat flooring, and neutral-coloured interiors. The area has superb game viewing and a number of activities on offer, such as game drives, walking safaris, boating safaris, and mokoro trips – all this keeps the ‘phone obsessed’ distracted from the fact there is absolutely no telephone or internet connection here. 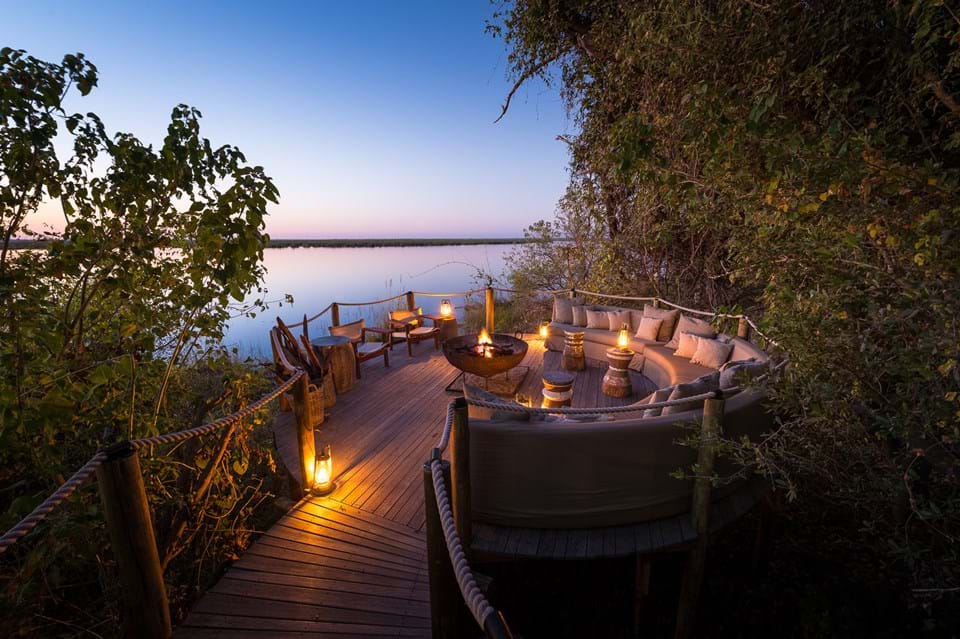 Set amid lion and wild dog hunting grounds, DumaTau is a fantastic little camp in the Linyanti Reserve in northern Botswana. Framed by mangosteen trees and the Linyanti swamp system, DumaTau is ideal for both water and land activities. From the raised en-suite tents, you can peer across the large hippo-filled lagoon before heading out on a traditional game drive or boat trip. Instead of checking emails and updating your social media accounts, you can watch birds from a floating hide, catch up on some reading in a comfy lounger, or wallow in the scenic swimming pool.

An oasis on the edge of the Makgadikgadi Salt Pans, Camp Kalahari has been designed in the tradition of the African safari Golden Age and embraces a simpler style that creates a laidback and homely base. This camp is the complete antithesis to lodges in the Okavango Delta, as the salt pans provide numerous desert activities – from bushman walks and horse riding to quad biking across the spectacular landscape. A real highlight at Camp Kalahari is the visit to one of the resident meerkat families, to watch these adorable animals forage for scorpions and grubs in the Kalahari. This is one brilliant photo opportunity, but you’ll have to wait until you are back home to post pictures on social media as there is no internet or mobile reception in this desert. 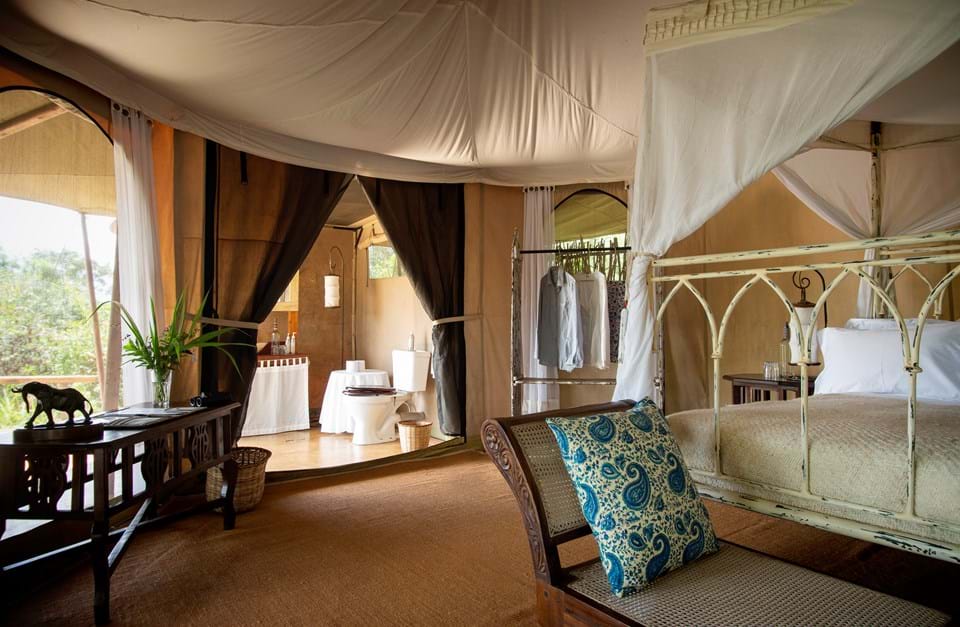 The managers of Alex Walker’s Kenya camps were asked so often if they had WiFi that they decided to get a dog. That way, when they were asked again, they could respond with a resonant ‘Yes!’ and produce their loving pooch, called WiFi. The first of the famous camps, Serian The Original was designed to be a retreat from the bustle of contemporary life. No WiFi, no TV, no stress. It is a charming tented camp in the Mara North Conservancy, just perfect for families. 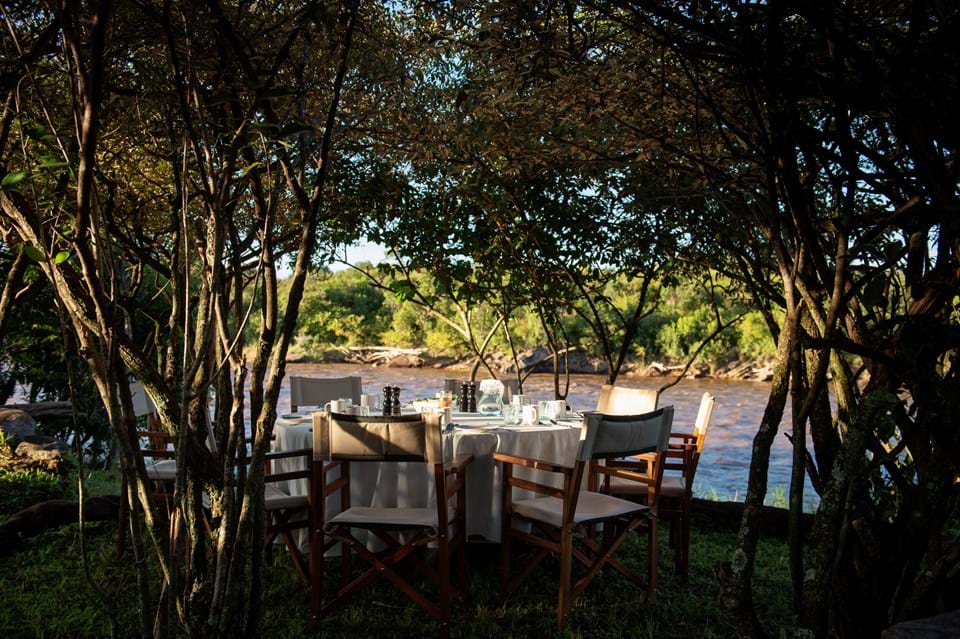 Combining brilliantly with sister property Serian The Original, Serian Nkorombo is a mobile camp located on the east bank of the Mara River, right in the middle of the Maasai Mara National Reserve. With a lively saltlick right next to the camp, which is regularly visited by black rhino, lion, and leopard, the Serian Nkorombo is a photographer’s dream where you can guarantee that no one will even think about checking their phone or trying to download their emails. 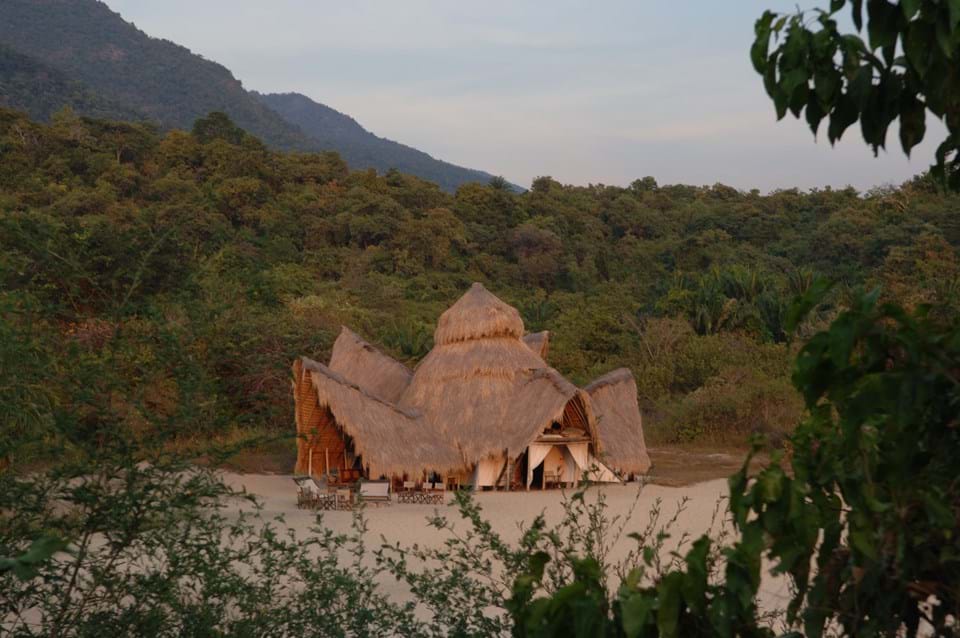 Accessed only by boat and far away from pretty much everything, Greystoke Mahale is one of Africa’s finest lodges. It is set on the sandy shores of Lake Tanganyika, with an incredible backdrop of the forested slopes of Mahale Mountains. There’s no WiFi, internet, or even cellphone reception – you stay at Greystoke Mahale for a different kind of connection. Here, you have the opportunity to encounter Tanzania’s congress of chimpanzees. Who needs FaceTime when you can have face-to-face meetings with these fascinating relatives in the rainforests of remote Tanzania? 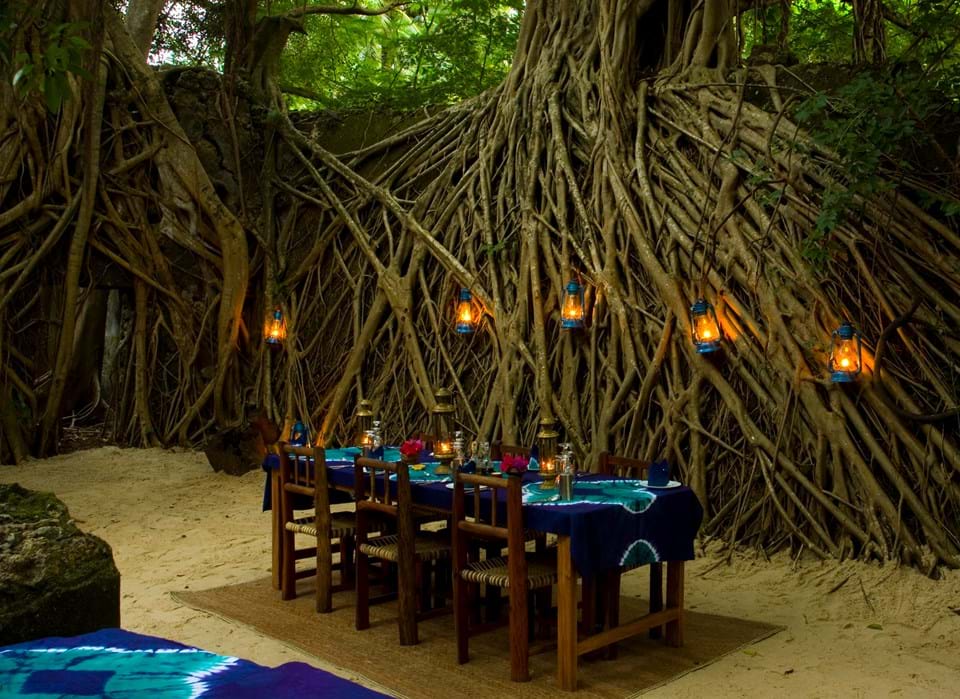 To get WiFi at Chole Mjini Lodge, you have to board a boat, head back to the old port on Mafia Island, and venture into the Red Herring Bar, which is owned by the lodge, and log on there. Chole Mjini Lodge’s charm doesn’t just stop at its wondrous lack of internet! It has just a handful of eccentrically styled treehouses, which are open sided and set on the northern tip of Chole Island. To keep yourself entertained, you can go diving, snorkelling, and dhow sailing, or simply walk along the beach, enjoying Tanzania’s breathtaking southern Zanzibar Archipelago. 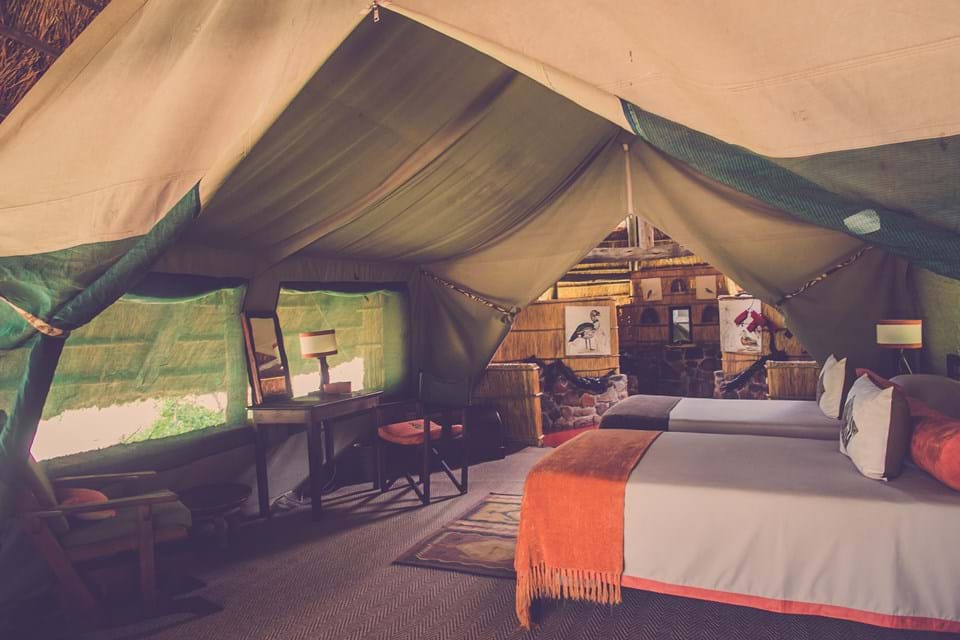 A rare little gem, Mwagusi Safari Camp is one of the oldest camps in Tanzania and home of legendary guide Chris Fox. Seemingly part of the bush, the lodge is at one with its environment and a real ‘back to basics’ affair. The camp is built using stone, driftwood, and bone, and there are definitely no WiFi hotspots or internet modems. At Mwagusi Safari Camp, you head out on morning and afternoon game drives, exploring deep into Ruaha National Park. 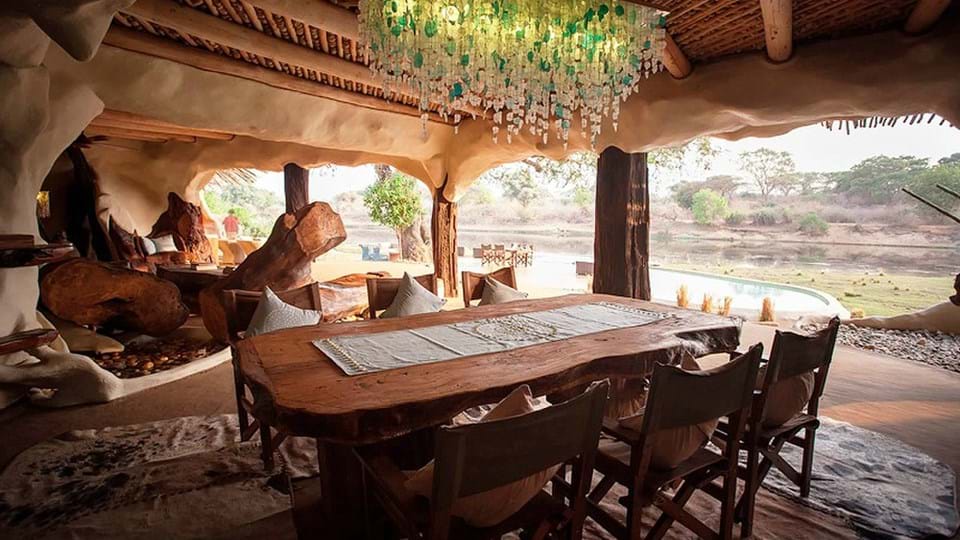 Imagine the architects were giant termites and the interior designers were the Flintstones, and you’ll have some idea of this unique and fascinating lodge in Zambia’s Lower Zambezi National Park. Booked on an exclusive-use basis, Chongwe River House has been built on the riverbank, which offers a constant source of water for game as well as regular wildlife sightings. There’s no wall to the front, and all of the large bedrooms are open to make the most of the views. With your own private chef, vehicle, boat, canoe, and guide, you’ll have meals and activities tailored to suit you personally. You won’t even have time to try to find some WiFi bars – and besides, there aren’t any here! 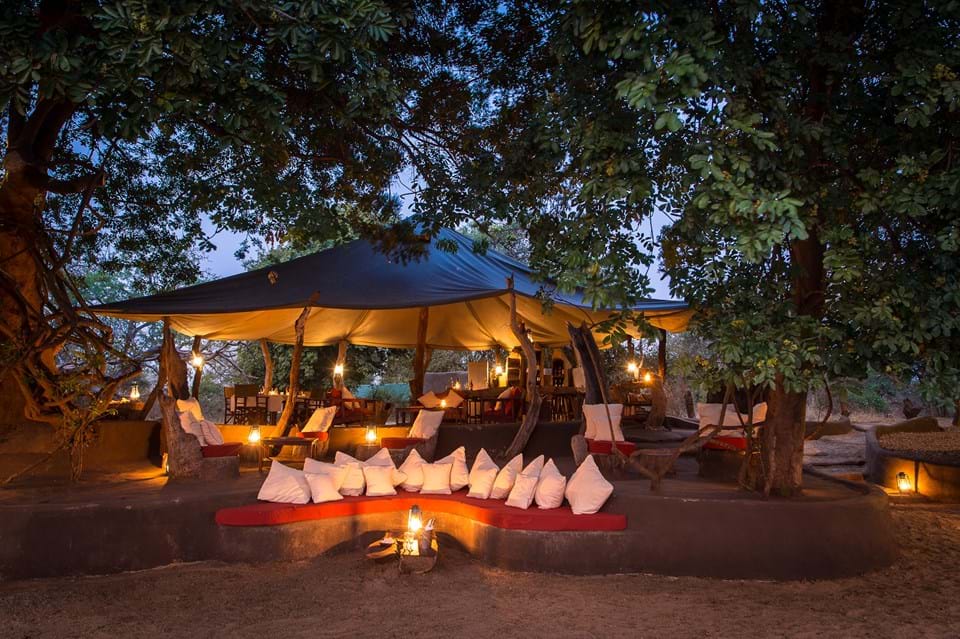 Run by Robin Pope Safaris and located in the remote Nsefu sector of South Luangwa National Park, Tena Tena is a truly wild camp ideal for a walking safari. Epitomising Robin Pope’s philosophy with aims to provide an authentic and adventurous safari while keeping you close to nature, Tena Tena is as far removed from the outside world as it gets. Here, there are just six tents, each with prospects facing the Luangwa River where hippos and elephants bathe. When staying at Chindeni, you should very much consider yourself out of contact, as there’s no mobile reception, no email capabilities, and no plug points in the rooms. Instead, take your opportunity to enjoy the camp’s remote location overlooking the Chindeni Hills in the southern sector of the South Luangwa. As well as spending hours watching the wildlife from the comfort of your private hammock, you can go on morning bush walks and afternoon game drives that often extend into night drives. 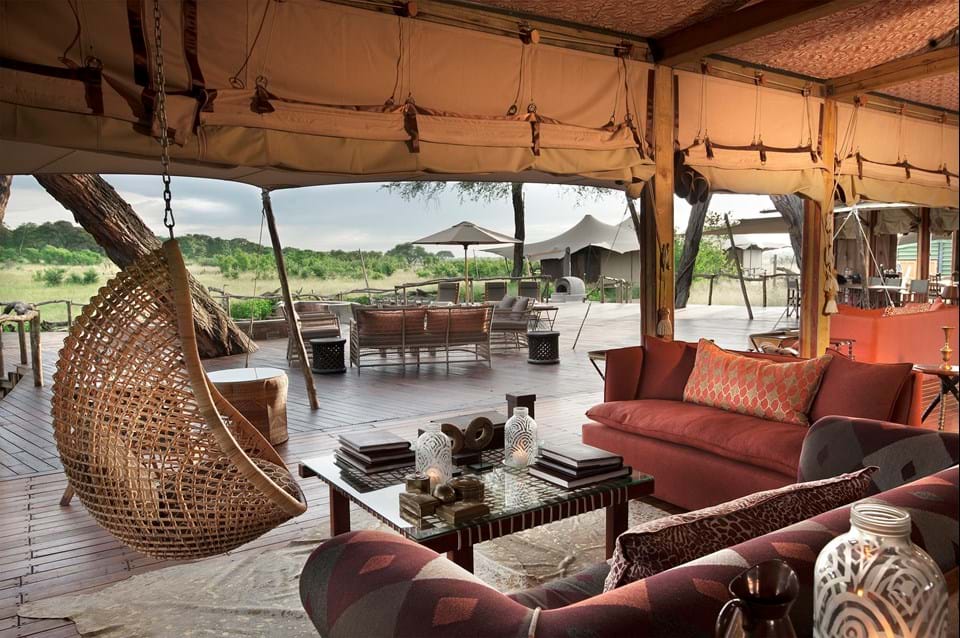 Somalisa Acacia is similar to its sister property, the larger Somalisa Camp, in many ways; however, this property is much more appropriate for families, especially those with younger children. Situated in the east of Hwange National Park, Somalisa Acacia is a superb and luxurious camp in one of Zimbabwe’s best parks. As well as soaking in the glorious copper baths, lounging by the swimming pool, and enjoying a few hours watching the wildlife visit the waterhole that is right in front of the camp, we recommend going on as many game drives as you can handle. Morning and afternoon drives guarantee fabulous big-game viewings, while the night drives usually provide epic showdowns between a pride of lion and their chosen prey. 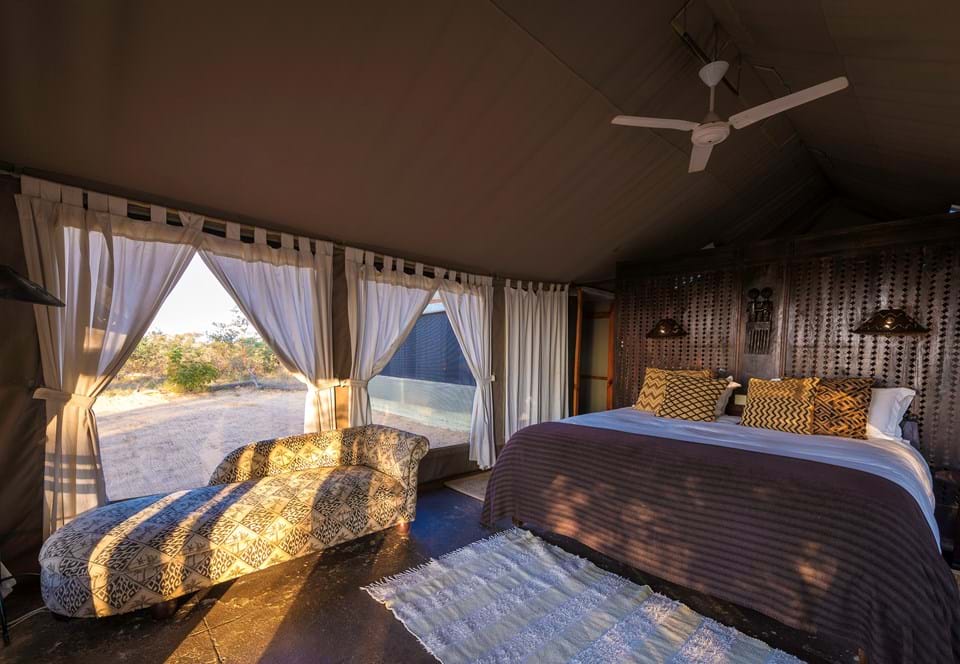 Previewing the open plain of a private concession, Davison’s Camp is a small property designed with a modern take on the colonial safari style. Also located in Hwange, this is another great camp in Zimbabwe where you can experience a pain-free Digital Detox. You’ll have your own news feed provided by the knowledgeable and charismatic guides at Davison’s as you are driven through the prolific game areas on your daily activities. They’ll discover the latest kills, show you the best views of Hwange, and position you for a perfect sundowner by a popular waterhole, where you’ll get the juiciest wildlife gossip. With such outstanding guiding to enjoy, a stay at Davison’s will certainly be a highlight of your vacation.