Everyone has heard of the famous African Big Five – lion, elephant, leopard, rhino and Cape buffalo. These iconic species are on most safari-goers’ must-see wish lists! But once you’ve spent a few days scouring the bush for them in a safari vehicle, how about an alternative safari experience, searching for Africa’s Marine Big Five? This is: whales, dolphins, seals, sharks and penguins!

All of these species can be found off the stunning coast of the Western Cape of South Africa – from Cape Town to Hermanus, the whale-watching capital of South Africa, and farther south to Gansbaai, a fishing town and popular tourist destination. A huge variety of sea birds and breathtaking rugged scenery are a big part of the experience too. And in some cases, you don’t even need to leave dry land to enjoy some of the incredible aquatic spectacles this area has to offer! 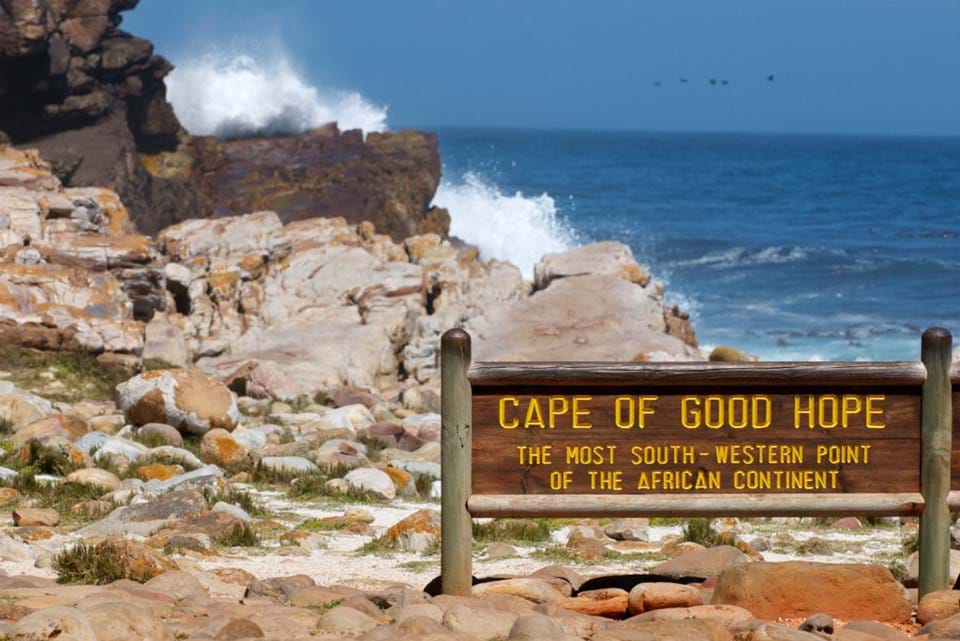 Every year, over 3,000 Southern Right Whales migrate all the way from their chilly feeding grounds off Antarctica to mate, calve and rear their young in the sheltered bays and warmer waters of South Africa’s coastline. They remain here for roughly half the year, from June until December. During this time, there is a particularly high concentration of whales in Walker’s Bay, frequently breaching close to shore or shooting water out of their blowholes – it is for this reason that the cliffs and coastal paths of Hermanus and De Kelders offer arguably the best land-based whale-watching in the world! 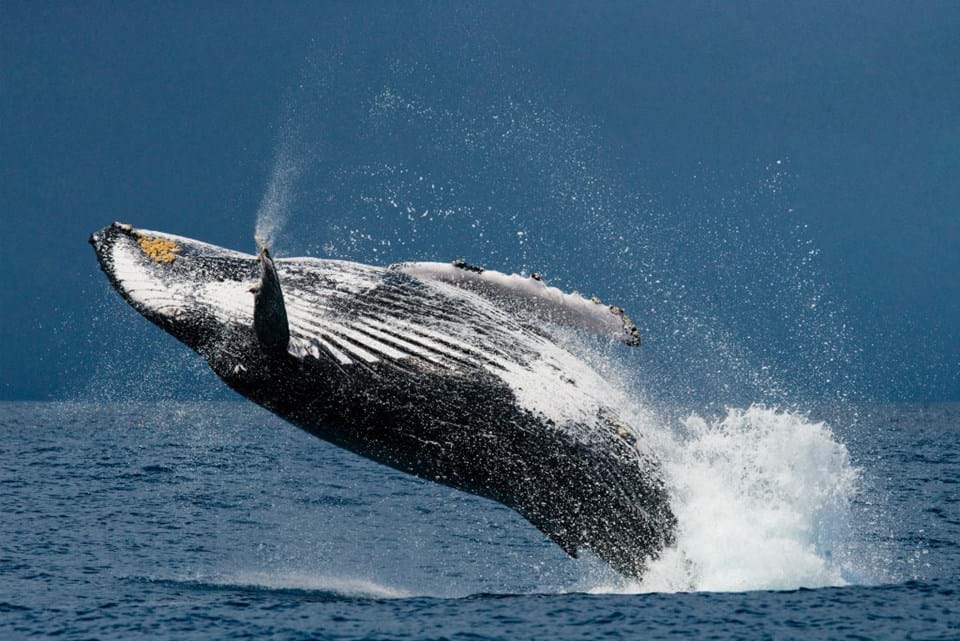 At the end of September, Hermanus hosts the Hermanus Whale Festival, an annual community event to celebrate the whale migration, with activities, exhibitions, and an emphasis on education and environmentally responsible adventures. In Hermanus you can also enjoy a 45-minute whale-watching flight, to fully appreciate the huge size of these incredible creatures from the air.

The whale migration brings these gentle giants to the whole coast of South Africa, not just the Western Cape, so it’s always worth having a look out to sea if you are driving along the country’s famous coastline at the right time of the year. It’s also possible to go on a whale-watching boat cruise or – if you are really lucky – to have a close encounter in a kayak! 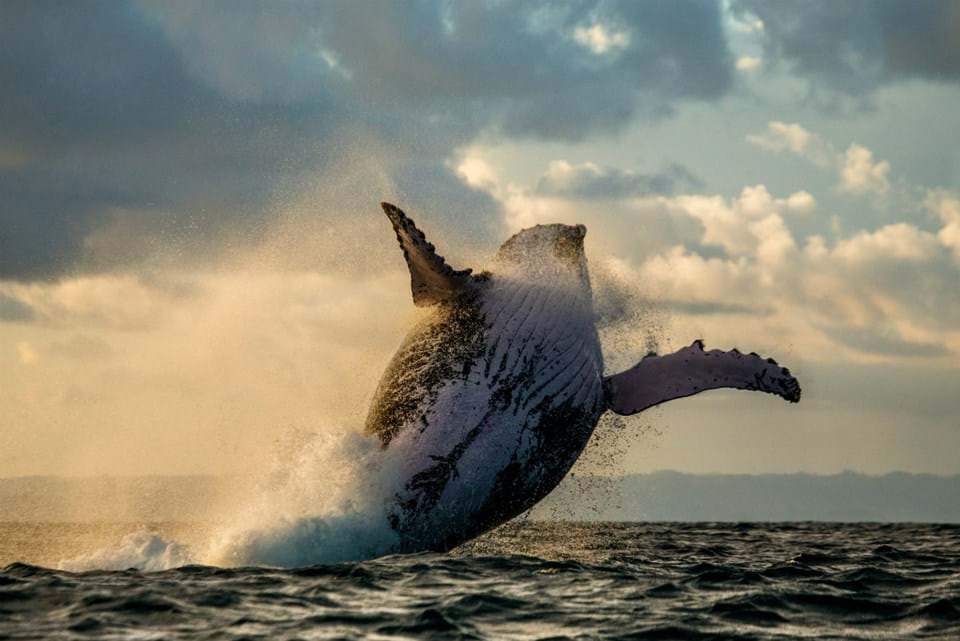 Indo-Pacific Bottlenose, Common and Humpbacked dolphins are all regular visitors to the South African coastline. They do not tend to venture into waters much deeper than 30 metres, which is why human encounters are common. However, Humpbacked dolphins, easily identified by their distinctive hump below the dorsal fin, are a shy species and generally stay away from boats and human activity. The other two species often approach and even seem to relish the interaction, surfing and splashing nearby, playing in the wake of the boats that have come to find them, and generally satisfying their curiosity about human beings! 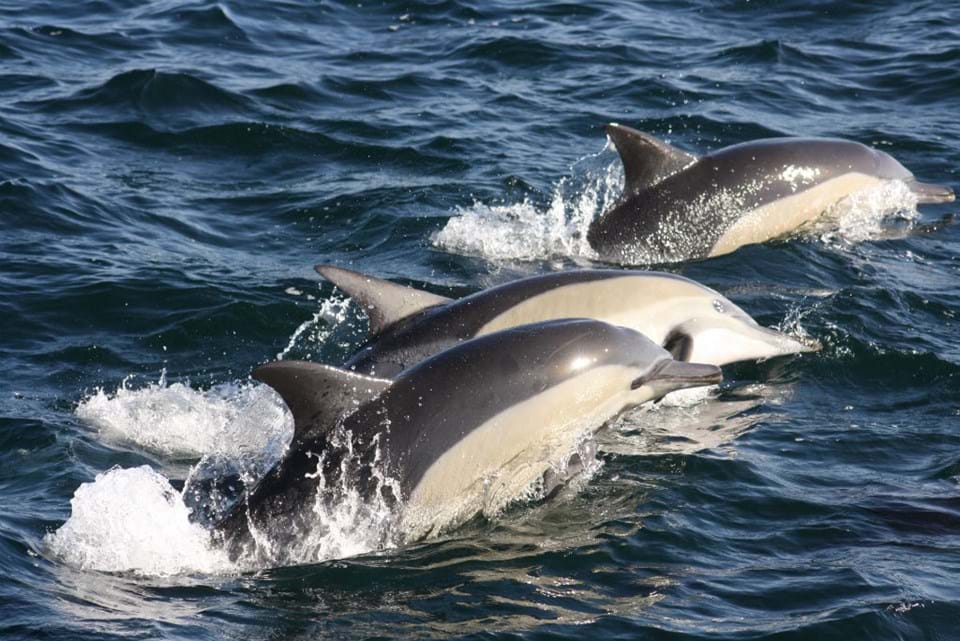 Plettenberg Bay, along the Garden Route, is a popular dolphin-watching destination and there are numerous places where you can view the creatures from the shore. They can also be seen from the shore in Cape Town – Simon’s Town and False Bay provide a good view. Alternatively, again, you can get closer on a dolphin-watching boat cruise, or by sea-kayaking. It is illegal to swim with dolphins in South Africa, so please avoid operators offering this experience here. Dyer Island, off the coast of Gansbaai, has a resident pod of Humpback dolphins – a highly endangered species. Fur seals also reside in this area and in turn attract sharks, making this a marine safari hotspot!

The annual sardine run, actually an enormous migration of millions of individual silvery pilchards, moving northwards along the east coast from the southern tip of South Africa, occurs from May and throughout July. The sheer size of this event creates a feeding frenzy along the coastline, a spectacle that is now a tourist attraction in its own right – during this two-month period, it is possible to see massive pods of dolphins following the migration! An estimated 18,000 dolphins, mostly the Common dolphin but also some Bottlenose dolphins, are largely responsible for working in teams to herd the sardines into huge bait balls that are 10–20 metres in diameter and extend to a depth of 10 metres, as the tiny fish bunch together for safety in numbers. These balls are short-lived, only lasting for a maximum of 10 minutes or so, but once the fish are rounded up, other predators, such as sharks, game fish and birds, take advantage of the opportunity to do some feasting. Truly one of nature’s greatest shows! 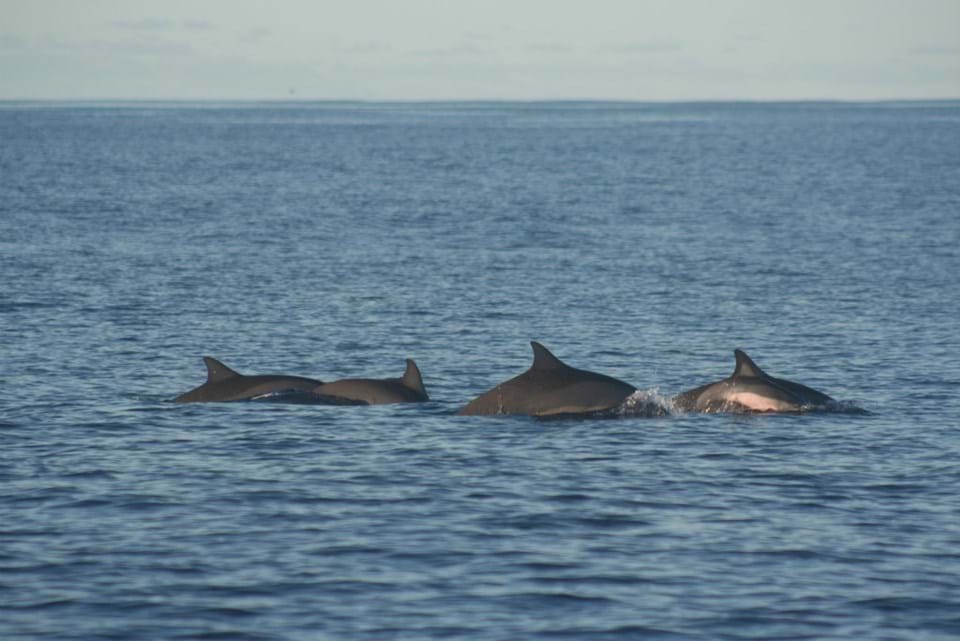 The gregarious and frisky Cape Fur Seal is endemic to Namibia and South Africa and is the only resident seal in South Africa. These seals number in the millions and live in colossal colonies in this part of Africa – some of the greatest concentrations of wildlife outside the Serengeti and Maasai Mara reserves in East Africa, in fact. One of the biggest colonies is now at Kleinzee, along South Africa’s west coast, which comprises up to 450,000 individuals. There are other, smaller concentrations off and along Gansbaai, Hout Bay, Plettenberg Bay and Cape Town. 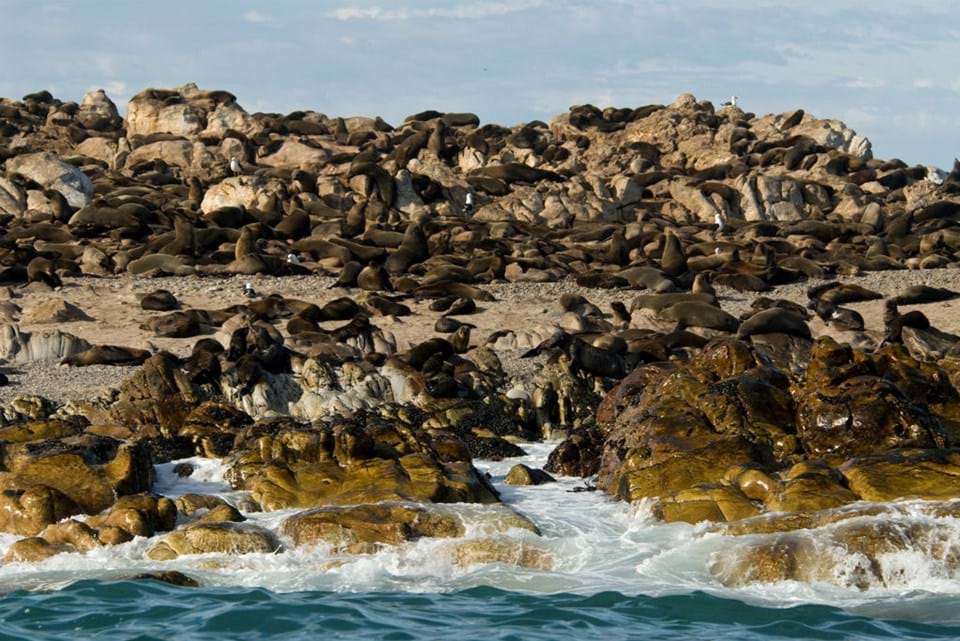 Geyser Rock, adjacent to Dyer Island, is home to a colony of nearly 60,000 Cape Fur Seals, where they constitute the main food source of the infamous Great White Shark. It is estimated that Geyser Rock can produce 10,000–12,000 seal pups per year, but not all of them will be lucky enough to make it past their first birthday. In False Bay, where they may also find themselves in shark-infested waters, the seals employ a number of anti-predatory strategies, such as swimming in large groups and harassing sharks in the vicinity, darting to cause confusion, and using their incredible agility and clever positioning to stay out of reach.

Seals are graceful ballerinas in the water! They are also endearingly curious, swimming alongside boats and bobbing up to investigate. They’re playful and will sometimes interact with divers and snorkellers. 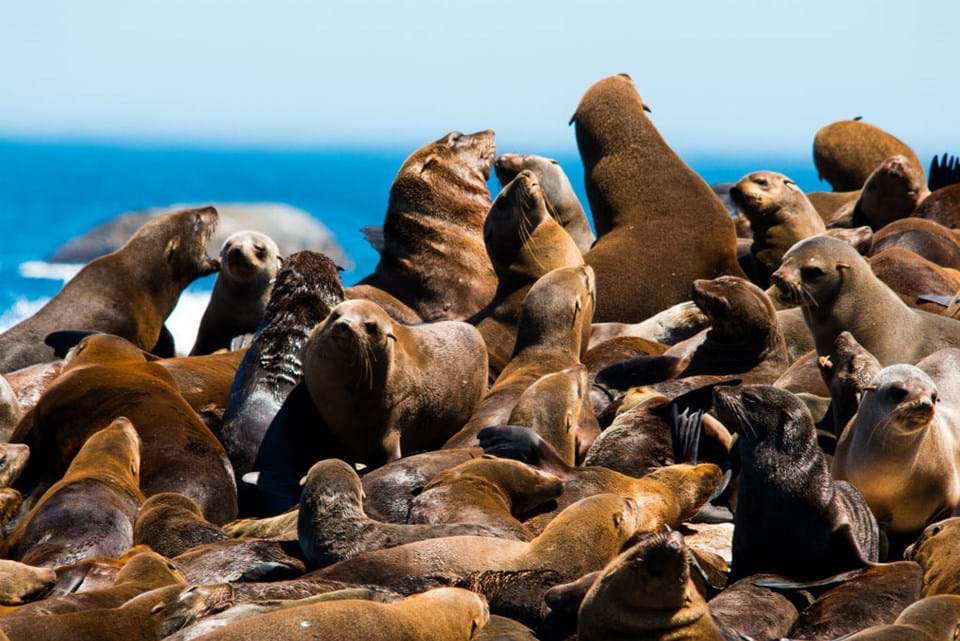 The Great White Shark is the most feared and awe-inspiring predator of the ocean. Unfortunately, due to negative publicity, it has suffered undeserved persecution and is today a threatened species. South Africa boasts one of the largest concentrations of Great White Sharks, supporting an estimated 2,000 of the 5,000 left on the planet. 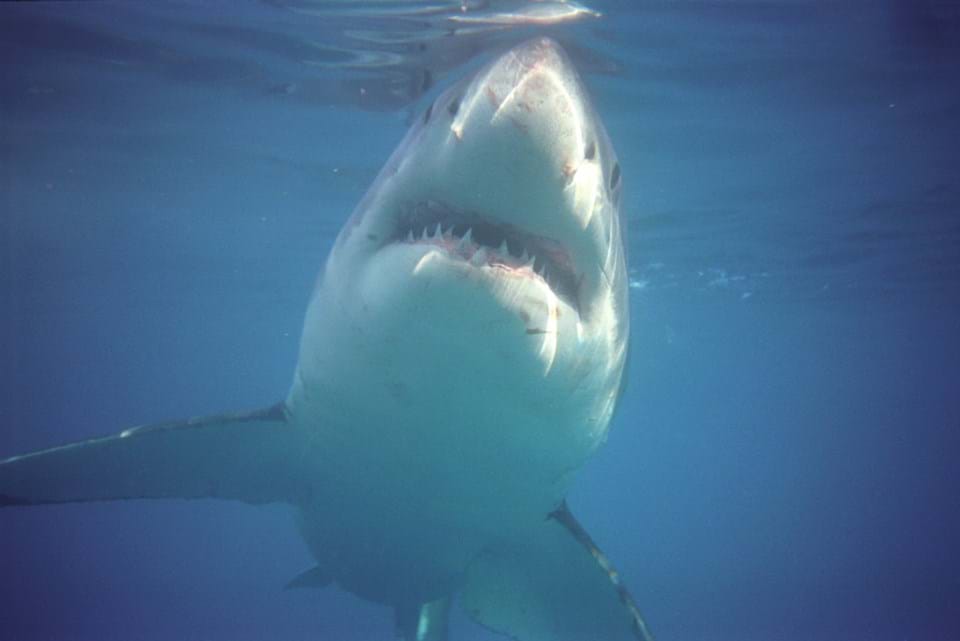 The Gansbaai area, and more specifically Dyer Island, is considered the shark-diving capital of the world, offering opportunities to observe, encounter and cage dive with the Great White Shark. There is no doubt that the shark-diving industry in this area is doing a lot to educate and add to the body of research about these magnificent creatures, but there is some debate about whether cage diving in particular is a good idea, ethically speaking. The sharks are attracted by ‘chumming’ the water, where a pungent bait mixture of fish parts, bone and blood appeals to the sharks’ keen sense of smell. This is unnatural and also, sceptics argue, conditions sharks to associate feeding with humans… and then those humans get into the water with them.

A large Great White can grow in excess of 6 metres and weigh more than 3,000 kg. Their finely developed senses allow them to detect the electrical impulses of their prey – fish, seals and even dolphins. One of their common seal-hunting techniques involves approaching the seal from below, racing towards the surface at high speed (up to 40km/hr or 25mph), and hitting the seal mid-body, with the resulting momentum often taking the shark partially or completely clear of the water, sometimes more than 3 metres into the air! It is possible to go out on boat tours from Simon’s Town to try to observe this incredible behaviour, although, again, there is some debate about whether this is a good idea, as decoys are sometimes used to encourage the sharks to breach. 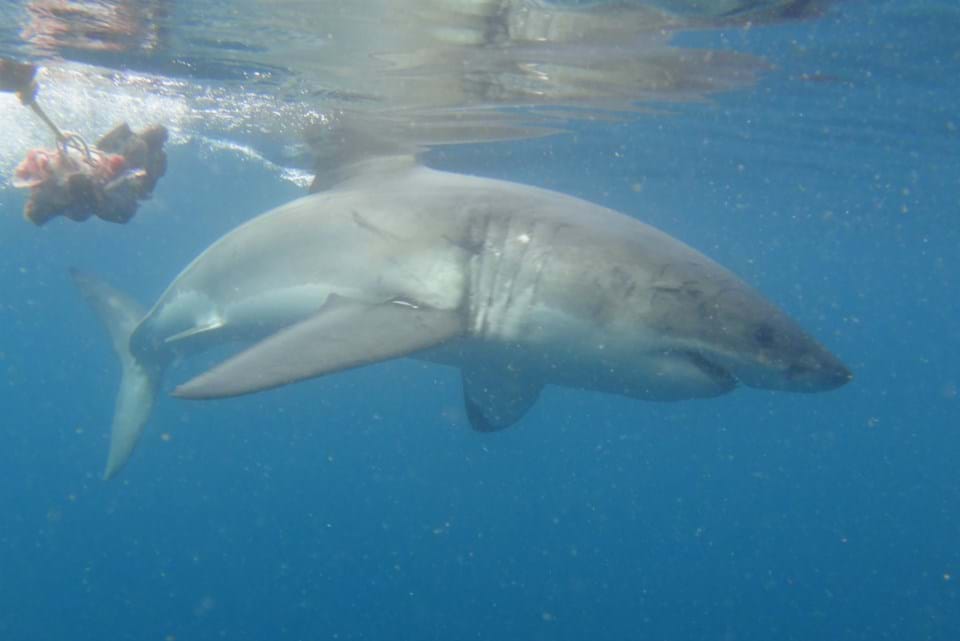 However you choose to view them, there is no denying that seeing such a huge and ferocious creature so close and witnessing its amazing size and strength is an experience you will never forget!

Also known as the Jackass Penguin for its donkey-like bray, the African Penguin is endemic to South Africa and Namibia. These penguins grow up to 70 cm tall and weigh between 2 and 5 kg. They might look clumsy on land, but they make up for it in the water – here they are exceptionally agile and swift, sometimes even outperforming dolphins and seals! 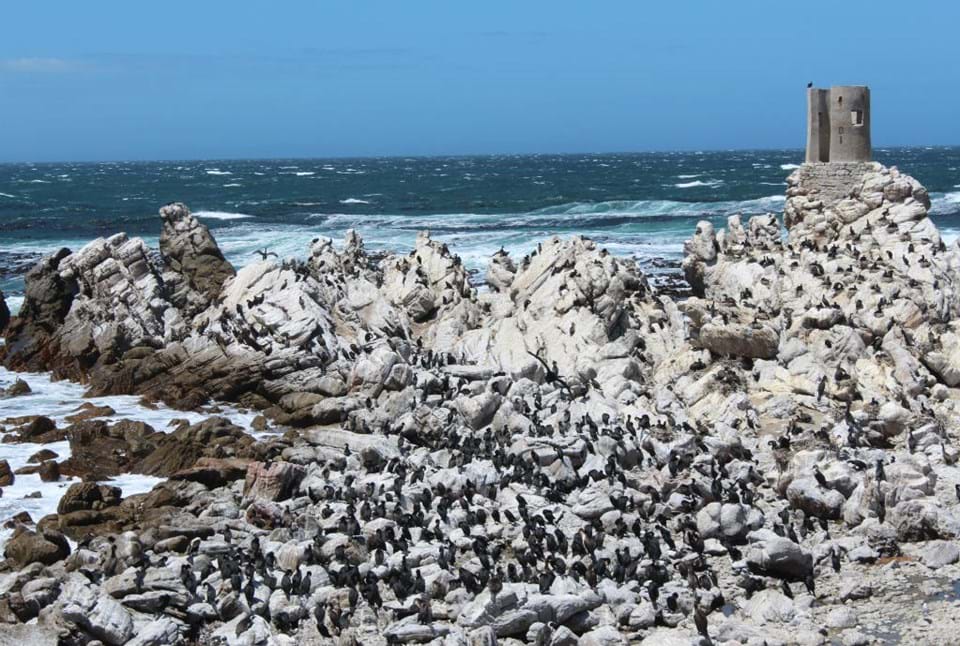 Today, the African Penguin is an endangered species. All penguin-breeding sites are now protected, with several organisations working tirelessly to halt their decline. The Dyer Island Conservation Trust is concentrating its efforts on the rehabilitation and protection of the Island’s penguin population – visitors to the area have the opportunity to visit this colony and learn more about the various conservation measures being taken to protect these charming creatures.

For a closer encounter, you can visit the colonies at Boulders Beach in Simon’s Town, Cape Town or at Stony Point in the quaint coastal town of Betty’s Bay, which is on the opposite side of False Bay from the city, farther down the coast towards Hermanus. At Boulders Beach there is a small entrance fee – this goes towards the birds’ conservation and helps to control the number of tourists visiting at any one time. Once beyond the gate, however, you are sharing the beach with the resident colony of over 2,000 penguins! Boulders is a stunning beach in its own right – sandy and spotlessly clean, with numerous gigantic, 540-million-year-old granite boulders to explore. The beautiful, clear water is chilly, but if you are willing to brave it you might even be lucky enough to be able to swim with the penguins! Betty’s Bay, the lesser-known but arguably better colony to visit, as it has more penguins and fewer tourists than Boulders Beach, also has a small entrance fee. Both locations have wheelchair-friendly boardwalks, which give a non-intrusive but close view of the penguins’ nesting and breeding sites. The best times to view the birds are early in the morning or late in the afternoon, when they return from their 20-kilometre fishing expeditions. 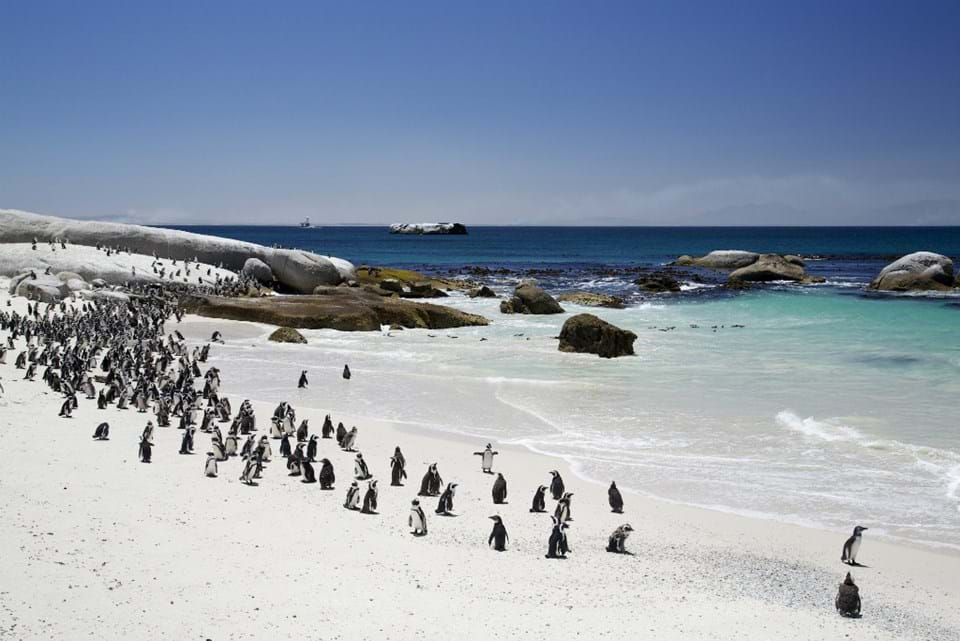 An hour or two watching the antics of these comical birds is sure to be a highlight of any visit to the Western Cape! They are well worth adding to that must-see wish list, along with all the other members of the Marine Big Five.