After Zeb and Oki had explored Kenya, they travelled to Tanzania and met Wilay Wildebeest! Wilay showed them lots of exciting sights, such as the huge Ngorongoro Crater that formed after a volcano erupted. Now he tells you some of the highlights. 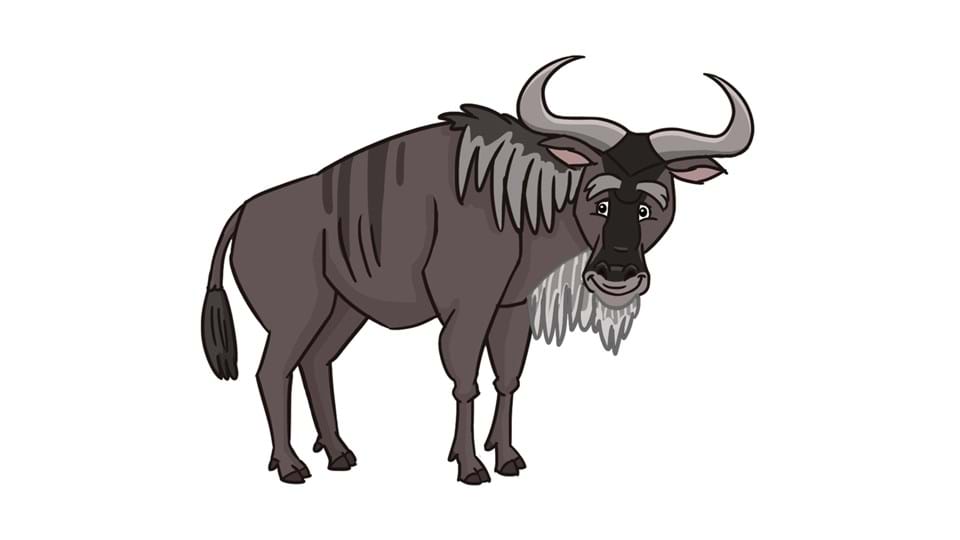 “Habari” (hello in Swahili) and welcome to my page! I am Wilay and I’m a wildebeest.

Now, my friend Zeb Zebra has asked me to tell you a few things about the wonderful country of Tanzania. I met Zeb and his friend Oki Oxpecker last October, in a park called the Serengeti. The Serengeti is just one of the areas on a route taken by hundreds of thousands of wildebeest, and zebra, and gazelles, every year. This route is called the Great Migration. We migrate to find food. It’s very exciting to see.

The Serengeti really is special. It has plenty of plains – big grassy areas where we herbivores like to graze. A herbivore is an animal that eats plants, in case you were wondering. In some places, there are hills too – and some of these have rocks on top. And in the north, there are two rivers and some forests.

If you are hoping to see a lot of wildlife, the Serengeti is an excellent choice. As well as all the Great Migration herbivores, there are lots of big cats, such as lion, leopard, and cheetah. There are crocodile in the rivers and monkey in the forest. And there are loads of birds. You can enjoy rides out to see all these species, and some camps offer activities especially for children. Arts and crafts, films, games… lots of fun for you all.

Picture time! After I had shown Zeb and Oki the Serengeti, we moved east to the Ngorongoro Conservation Area. When you say “Ngorongoro”, you leave out the “N” and the “n” – “Gorogoro”. The Ngorongoro is a volcano, but don’t worry – it won’t blow up while you’re here. The last time it erupted was over two million years ago, and scientists don’t expect it to go up in smoke again for a very long time. When it last erupted, it blew its top off. BOOM!

After the explosion, an enormous dent was left on the top. This dent is in the shape of a bowl and is called a crater. Today the crater contains a lot of water and is very popular with thirsty wildlife. There are woodlands too, so, just as in the Serengeti, you can go on a game drive and you are sure to see a massive amount of wildlife. Some camps provide children’s activities as well – nature walks around the rim of the volcano, for example. That’s fun too.

Zeb, Oki, and I certainly enjoyed our trip here, as you can see from the picture at the top of this page. We are all smiling.

We also had a pleasant few days in Lake Manyara National Park, another of my favourite areas. This park isn’t as well known as the Serengeti and the Ngorongoro Crater, but to my mind it is well worth a visit. It’s a pretty little place, with a lake, as you’d expect. In fact, the lake makes up two-thirds of the park.

There are many fine sights in Lake Manyara. They include the Great Rift Valley escarpment. This is a very tall cliff that rises up over the edge of the water. I also like the flocks of pink flamingos feeding in the middle of the lake.

Well, it’s picture time again now, and here’s an unusual chap called a tree-climbing lion – another fine sight in Lake Manyara. Do you know, I was so surprised when I saw him that I broke wind. I thought Zeb and Oki would never stop laughing.

Our last stop on Old Wilay’s Tanzania Tour was the Selous Game Reserve. I don’t know whether any of you are keen on geography, but this park is some way south of the Serengeti, the Ngorongoro Crater, and Lake Manyara. It’s enormous, and full of wildlife.

Zeb, Oki, and I found that the Selous was a very watery place. It contains not only a big river called the Rufiji, but a lot of other rivers and streams too. You can go out on a boat and have fun spotting hippos and water birds.

On the subject of water birds, here’s a picture of three friends we made while we were in the Selous:

These birds are called pelicans. They live in the Rufiji river and they like to eat fish. Can you see the pouch under each beak? The pelicans use this to catch fish, like a sort of basket.

Well, that’s all from me, for now. I hope you’ve enjoyed reading about my country – or just looking at the pictures, if that’s what you prefer. Tanzania really is wonderful, and I’m sure you’ll have a splendid safari if you decide to come here.

If you wish, click here to read about me and wildebeests in general. We are groovy guys.

FANCY ANOTHER TRIP? WHY NOT FOLLOW ZEB AND OKI TO MOZAMBIQUE? OR, CLICK ON THE LINK BELOW TO FIND OUT MORE ABOUT ME AND WILDEBEESTS IN GENERAL. WE ARE GROOVY GUYS.

After Tanzania, Zeb and Oki travelled to the coast to explore Mozambique.

Learn some fun facts about Wilay and his wildebeest friends.

Here are Zeb, Oki, and I on our boat, when we were on safari in the Selous Game Reserve. I didn’t know what Zeb was doing when he came towards me with a long stick, but Oki explained that he just wanted to take our photograph.

Here’s a word puzzle for you, children. My word search includes the word WILDEBEEST – I think you should all feel very pleased with yourselves if you find it!

"Emma at Yellow Zebra Safaris together with the rest of the team did an outstanding job in designing a Safari for my wife and I to match our exact desires and adapt to every change and decision we made. They have arranged a superb agenda that includes Cape Town, Kruger/Sabi Sands, and the Serenge..."

"Excellent service! We had a wonderful safari. Highly recommend the YZ team. Kelly, Catherine and all were friendly, responsive and super organised. The experience exceeded our expectations."

"Yellow Zebra created the perfect trip for my family to celebrate my 80th birthday! Tanzania and Zanzibar enchanted my 5 and 7 year old grand children, and despite Covid restrictions, there were no hiccups along our way. A shoutout to Matt for his impeccable planning, and the whole operations te..."

"Yellow Zebra created the safari of my dreams! I initially emailed a few companies to get multiple opinions and insights, but I immediately knew my search was over after my very first response from Yellow Zebra. They truly want to make the experience tailored and perfect for you. They were in cont..."

"James was kind enough to put together an Uganda safari for me. I have to say this safari exceeded my expectations. During the planning process, I was informed of all changes in COVID-19-related testing and kept me updated on the latest requirements. Needless to say, the trip was amazing. Everyt..."