You will love Namibia if you enjoy looking at amazing scenery! Zeb and Oki were guided around this country by Rudo, a friendly rhino. They saw loads of wildlife and they even went surfing together! Now Rudo writes about all the fun they had. 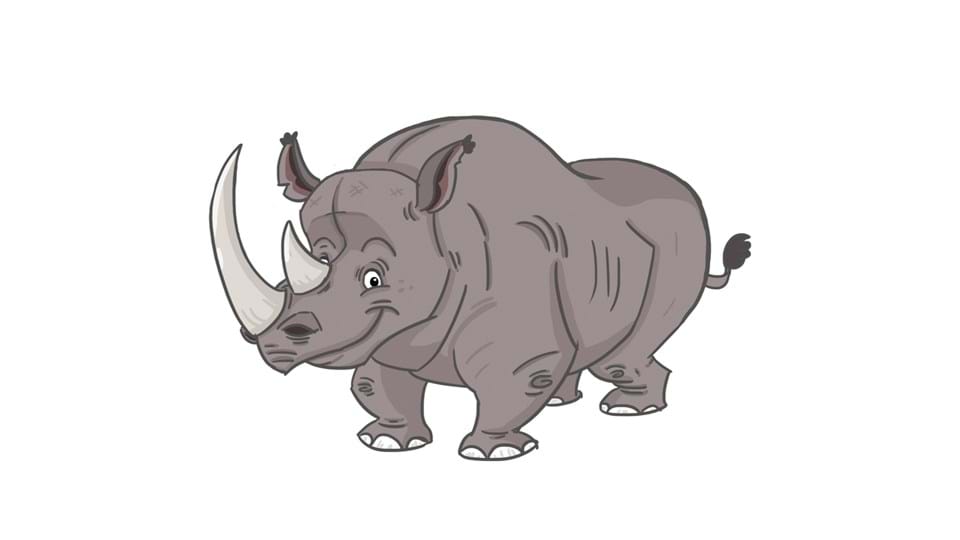 Wa lalapo, kids. That means “Good day” in a language called Oshiwambo! Howzit? My name’s Rudo and I’m a rhino from Namibia, otherwise known as the coolest country in the world!

Usually I spend all my time in a place called Etosha National Park. All my friends live here. It’s great!

But last year, a zebra with a yellow stripe in his hair turned up in the park. And with him, there was a little lady oxpecker. The zebra dude said his name was Zeb, and that he and Oki Oxpecker were looking for someone to come with them on safari all around Namibia. For some reason, he asked me!

I thought about it, but not for long. The truth is, although I love my park, I’ve always wondered what else there is to see in my country. So I said a firm “YES!” and Zeb said, “Aces!” Little Lady Oki flew onto my head and did a dance.

We started in Etosha, then we made our way to three other areas. Now Zeb has asked me to write a few things about our safari. After I’ve done this, below, there’s a puzzle and a colouring sheet! And there are Five Fun Facts about me and my rhino friends.

Zeb and Oki loved Etosha. There’s so much wildlife here! If you take a look at the top of this page, you’ll see us all on a game drive together. There’s a couple of my rhino friends crossing the road, and in the background there are more rhino, zebra, wildebeest, giraffe, gazelles, and ostrich!

Etosha has elephant too, and lots of meat-eaters – lion, leopard, cheetah, hyenas, and wild dog. And what is really special about the park is that it has roads like the one in the picture all the way through it. This means that visitors can drive themselves! You can choose where to explore and when to stop to look at the wildlife.

Little Lady Oki asked me to stop when she thought she saw an owl! This was a ginger dude called a Pel’s fishing owl. He was roosting on a tree branch in the south of the park. When he heard us, he opened his eyes, called “Hellooo!” to us, then went back to sleep. Cool!

As well as game drives, some camps in Etosha offer activities just for kids – like arts and crafts, and nature walks!

After we had looked all around Etosha, Zeb, Little Lady Oki, and I kept driving, travelling north-west to Skeleton Coast National Park. Now, this is where you come for amazing scenery!

Okay, so the Skeleton Coast does not have anywhere near the amount of wildlife there is in Etosha. But you can have fun looking for elephant, zebra, giraffe, hyena, seals, and maybe a cheetah or two! We really enjoyed our drives and walks along the coast. It is not safe to swim in the sea here, but you can check out the seals and even see some shipwrecks! And the Skeleton Coast has massive sand dunes – for most of our time here, we were simply staring at things and shouting, “WOW!”

We shouted “WOW!” a lot while we were in Damaraland too. That was our next stop on the safari. It’s in the west of Namibia – we drove here from the Skeleton Coast. Damaraland is a very dry place, so there is not much wildlife.

However, the area is home to a type of elephant called “desert-adapted elephant”. These elephant are different from the elephant in Etosha, for example. They have bigger feet, so they are able to walk easily over the desert sands. They have longer trunks, so they are really good at digging for water! And, most important, they don’t need to drink as much water as the Etosha elephants. Pretty cool!

Damaraland also has black rhino. Woo-woo! A big highlight of our trip was a day at a place called Twyfelfontein. This is a valley, with slopes made of smooth sandstone. On the sandstone there is rock art, which was made during the Stone Age, about 6,000 years ago. Zeb, Little Lady Oki, and I had great fun naming the animals shown on the rocks. Can you find the rhino in our picture?

We enjoyed our time in Damaraland so much, we were sorry to leave! But there was just one more place we wanted to visit on our safari. This was Sossusvlei!

Sossusvlei is also in the west of Namibia, but much farther south than the other areas we had seen. Like the Skeleton Coast, it is famous for its scenery. Here, we saw enormous orange sand dunes, as high as the sky!

There are lots of exciting things to do in Sossusvlei. You can go on game drives, nature walks, horse rides, hot air balloon rides, and quad bike rides! There is some wildlife here – rodents, antelopes, reptiles, and birds. Zeb, Little Lady Oki, and I enjoyed all of these activities. But what we really loved was surfing down those enormous dunes. Super-cool!

This was an excellent end to our safari! We’ve already decided we’re going to meet up soon and do it all over again. I hope you’ve had a great time reading all about our travels – happy holidays, kids!

WANT TO SEE WHO ZEB AND OKI MET NEXT? FOLLOW THEM TO SOUTH AFRICA! OR, CHECK OUT THE FIVE FUN FACTS FROM THE LINK BELOW.

Next Zeb and Oki travelled to South Africa.

Learn some fun facts about Rudo and his rhino friends.

What a great picture! Here we are just before surfing the dunes in Sossusvlei – totally cool, dude!

Hi kids! I think you’ll have lots of fun with this puzzle! It has a mixture of short words and long words, from WOW to TWYFELFONTEIN!

"Emma at Yellow Zebra Safaris together with the rest of the team did an outstanding job in designing a Safari for my wife and I to match our exact desires and adapt to every change and decision we made. They have arranged a superb agenda that includes Cape Town, Kruger/Sabi Sands, and the Serenge..."

"Excellent service! We had a wonderful safari. Highly recommend the YZ team. Kelly, Catherine and all were friendly, responsive and super organised. The experience exceeded our expectations."

"Yellow Zebra created the perfect trip for my family to celebrate my 80th birthday! Tanzania and Zanzibar enchanted my 5 and 7 year old grand children, and despite Covid restrictions, there were no hiccups along our way. A shoutout to Matt for his impeccable planning, and the whole operations te..."

"Yellow Zebra created the safari of my dreams! I initially emailed a few companies to get multiple opinions and insights, but I immediately knew my search was over after my very first response from Yellow Zebra. They truly want to make the experience tailored and perfect for you. They were in cont..."

"James was kind enough to put together an Uganda safari for me. I have to say this safari exceeded my expectations. During the planning process, I was informed of all changes in COVID-19-related testing and kept me updated on the latest requirements. Needless to say, the trip was amazing. Everyt..."